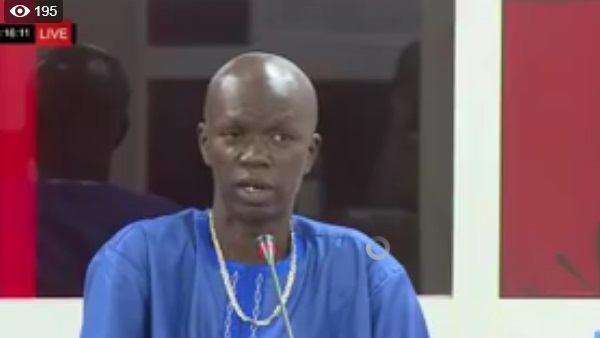 Yusupha Mbye, one of the students shot by Gambian security officers during a demonstration in April 2000, has told the TRRC that President Adama Barrow never kept promises he made to them while he was Dakar in January 2017.

Mbye, who is confined to a wheel chair for 19 years now, claimed that President Barrow has promised during the political impasse that he is going to provide them with medical care upon his return to the country but he is yet to fulfill that promise.

“We had a meeting with President Barrow shortly after he was sworn-in to office in Dakar, where we discussed our plight and he promised us that he would provide us medical care as soon as he returned to the country.

He even told us that he too can feel our pain since it was only a few days previously that he too lost his son in the same struggle.

After the meeting, the President asked Amie Bojang, the director of press to take down our details.

Up to this day, that promise has not been fulfilled and we only saw him again only once during the German president’s visit,” the witness alleged at Monday’s session.

He said his trouble with the justice minister is that the April 10-11 case was so straight forward that it should not have come before the TRRC.

“The Commission of enquiry’s report on the matter was issued and had recommended for the prosecution of some people.

Why is this not done? We have petitioned the Gambia government and submitted to the office of the Justice ministry but he never replied or did anything about it.

Whether the government considers us or not, we are ready to take things on by our own,” a frustrated Mbye told the TRRC.

The witness said the money recovered at the Janneh Commission should be entirely used for the victims and nothing else.

He said if the government fails to take up its responsibility until the commemoration of the next April 2000 students’ demonstration, there wouldn’t be any commemoration but they will instead march to State House.

“He will just see us at the State House gate.

He can do as his predecessor did, to order his security to shoot us because we are ready for that.

We are useless right now and we need support,” he said.

He then turned to explain his ordeal. “On the 10th of April, I went to school without knowing about any planned demonstration.

I came to know about the protest at a cafeteria in the vicinity of the school while I was taking my breakfast.

I was then in Grade 10 at Pipeline Comprehensive School,” he told the TRRC.

The then 17– year – old said he joined the student crowd walking towards Kairaba Avenue and could remember seeing students from other schools around Africell junction.

He said while there, he saw the PIU dressed in anti-riot gears who came to disperse them.

“When they came there, they wanted us to disperse.

They wanted to disperse us but we stood our ground.

After some time they released tear gas and we all dispersed,” he said.

But he added that they managed to proceed to Westfield to know what was happening there. He said when they arrived at the Gampost Office along Kairaba Avenue, they met students looting the place.

“The PIU started releasing tear gas and the boys (students) also started stoning them,” he said, adding that the security personnel chased them until they reached Westfield where they found some more paramilitary personnel at Westfield.

“When we got to Westfield, there were students who stoned the paramilitary and we were told that two students were shot and they were taken to Banjul hospital,” the witness said.
He said while standing at Westfield around the Maroun’s Supermarket, the then chief of defense staff at the time Baboucarr Jatta came with a crowd of students heading towards Westfield. He indicated that students were demanding for CDS Jatta to enquire what happened to the two students who were shot.

“The boys were angry.

There were some insulting CDS Jatta and some were throwing stones,” he said, adding that Jatta was surrounded by the crowd with only one guard but some students volunteered to protect him.

He said CDS Jatta was left to go and negotiated with the armed police officers.

“During the negotiation, Baboucarr Jatta disappeared and was seen again,” the witness said, adding that “the officers then began shooting us.”

“I only woke up at the hospital to discover that my back was close to my neck,” he said.
Mbye said he stayed in comma for days before regaining consciousness.

He explained that he was told by the nurse attending him that he was placed at the mortuary, only for them to see him moving after which he was removed from the midst of the corpses and transferred to the Intensive Care Unit.

He said a bullet was removed from his throat at the hospital during an operation with a damaged spinal cord.

“I am paralyzed from the neck going down,” he said.

He said an internal feeding cube was fixed to enable him eat because he couldn’t eat solid food.

He said the nurses especially those who were on night duties weren’t helpful to him because they neglected him.

“I used to call the nurses but I wouldn’t see them,” he said.

He said at the Intensive Care Unit, he was with Assan Suwareh, Fra and a child who was shot in the head.

Mbye denied statements that the students were armed, saying the protest was peaceful.

The witness recalled that they were visited by Yahya Jammeh, adding that Fatoumata Jahumpa Ceesay used to bring them corn flakes, milk and some money.