UDP not Party to ‘Coalition Extension of Barrow’s Mandate’ 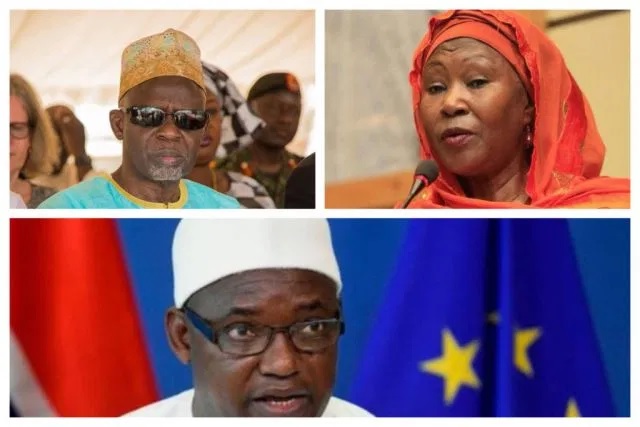 The spokesperson of the United Democratic Party, Almamy Fanding Taal has said that his party is not part of the declaration by former vice president Fatoumatta Jallow Tambajang, who said on Friday that the coalition 2016 has decided to extend the social legitimacy of President Adama Barrow’s mandate from 3 to 5 years.

“Tambajang’s statement does not reflect the position of the UDP. Our position is that you cannot amend a decision without signing it.

There are three pre-conditions to the Coalition 2016, the first one was that the flag-bearer should come from a party or an independent group who should go through primaries, and if he or she wins he/she has to resign from his/her party and the third condition was that the person will serve for three years.

This was the general agreement for Coalition 2016,” he told The Standard yesterday.

He noted that two of the pre-conditions were met by the eventual presidential candidate for the Coalition.

He said Madame Tambajng, who has no political party was representing herself.

“Since she initiated the coalition talks again and other members who are minorities in the Coalition wanted to change the agreement without signing it, we had said that we have to sign it before we could discuss the viabilities of amending the terms and conditions.

PDOIS was not participating in that first consultation.

So, when we left our understanding was that things are going to be discussed further and, in the event that discussion happens, we will be invited,” he argued.

However Taal said no one can divorce 2016 from the subsequent elections that happened in the Gambia “whether that is 2017 or 2018.

So that is why we are saying that if you are speaking in the name of a Coalition you should ask who the Coalition members are.

PPP, NCP, NRP, GMC, GPDP together with Tambajang; how many percentage of the vote do they have? In a democracy it is always about that.

It is not good enough to say that we have a Coalition and a minority deciding how the Coalition is going to go,” the UDP spokesman said.

Meanwhile, following an audience with President Barrow at the State House in Banjul, Madam Tambajang who is the chairperson of the Coalition announced that the Coalition has agreed to support the 2021 constitutional mandate of President Adama Barrow.

She argued that the development program, especially the reform agenda, of the Coalition government cannot be fully implemented in less than five years.

“On the basis of the incompletion of the reforms agenda, we, as a coalition, have decided to extend his [referring to President Barrow] social legitimacy from three (3) years to five (5) years”, Chairperson Jallow Tambajang said, revealing that the decision followed two years of consultations with all stakeholders both home and abroad.

Madame Tambajang added that the decision to extend was never solicited by the President; instead, it was borne out of the realization that it defeats logic and reason to abandon the ongoing reforms halfway and call for a new election.

“That is why I said today is historic.

This is something the whole world should hear.

His Excellency did not ask for it.

We will continue to champion the cause of the country.

That is why we thought it prudent to come and discuss and assess the journey so far”.

The Coalition Chairperson stressed that the Coalition stakeholders are now going to amend the agreement in line with the decision taken at the Friday meeting, arguing that the signed agreement, and not the MoU, is what binds the stakeholders.

“The MoU is important. But the fundamentals are the agreements signed by all parties, which entail the reform agenda.

If that reform agenda is incomplete, and considering the state in which we took government, we cannot leave that half-way and ask for elections or find another president.

That is not rational.

It is not logical.”

She said the meeting was also meant to discuss with President Barrow on how they can strengthen the coalition body as an institution in order to support the government.

Part of their plans, she disclosed, include setting up a fully-fledged secretariat as well as embarking on a national dialogue with the public on the way forward.

Mrs. Jallow-Tambajang described President Barrow as someone who has shown interest, respect, and recognition for the Coalition.

Reacting on the significance of the absence of key stakeholders like the UDP and PDOIS in the agreement, leader of the National Reconciliation Party (NRP), Hamat N.K Bah said it is their decision not to be present.

That’s it. If the two parties felt that they don’t want to be part of the discussions, that decision will be taken as their choice which is internal.

But if the two are away and six are present that is a landmark achievement,” Bah concluded.