You are perfect because of your imperfections 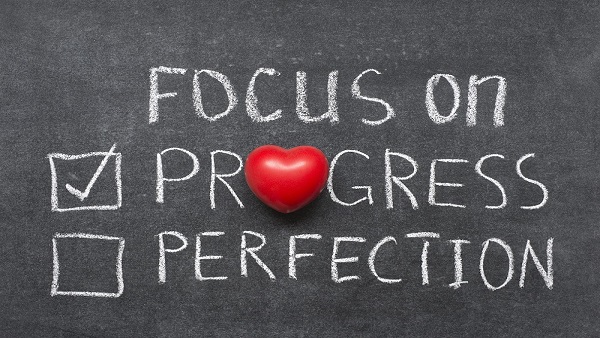 How does it feel to be perfect? No one knows because what defines perfection? About a week ago I saw a TV show called Victoria’s Secret Fashion Show. One after one of the most beautiful models walked out on the special stage, called catwalk. They wore these astonishing creations and tripped on high heels along the catwalk while the audience clapped their hands. Music was pumping in the background and it was a very professional show. In between, they showed a little about the model’s life outside the fashion show. The girls were working out, building muscles enough to show that their bodies were fit. Everything was made to look perfect; the girls even wore makeup while training. This programme about Victoria Secrets’ Fashion Show comes once a year, around Christmas. What the programme doesn’t show is how the girls actually look when they don’t wear makeup, curls in their hair made by some fancy hair dresser and all these beautiful clothes.
I shouldn’t say clothes, by the way, because they show underwear.

The underwears are very exclusive and they don’t leave much to your imagination. As so small parts of the model’s bodies are covered with some kind of fabric they really have to be in perfect shape. That means starving themselves for weeks before the show and exercising several hours every day to tone every muscle group to perfection. The models know that it is not only the underwear they are wearing that people like or criticise, it is just as much their bodies. Among models, it is a great honour to have been chosen to participate in this show, but they have to sacrifice a lot. I wonder how it feels to walk around almost naked on a stage, knowing that people are judging the way you look. This business has nothing to do with inner qualities, only shallow ones.

It is like they don’t own their own bodies – others poking here and pulling there, saying that the teeth have to be fixed, the breasts are too small or the butt too big.
Thank God for modesty! Thank God for the rules given to us through the Holy Qur’an that women don’t need to feel any pressure to expose our bodies.
It is a relief for every woman of Islam. We have the same rules in Christianity also, but people don’t follow them the same way.

When we dress modestly we get to focus on other things, as the most important thing of all – our inner qualities. Those of you, dear readers, who don’t know how it feels to be a woman – we sometimes feel like a prey. Many times, even among highly educated people, men are valued for their qualifications. No one mentions if a certain man has a nice hairdo, a nice suit or a handsome figure. He doesn’t get comments about his butt when he passes some women. No one shouts at him with sexual invitations. No one is looking at his chest instead of in his eyes when he is speaking. All these are what we, the women, have to endure. It is annoying and humiliating.

Remember that the woman who gets these so-called catcalls or comments is someone’s sister, wife or mother. Judge us for our inner qualities, our kindness and abilities – our bodies are not something to speak about in public. Modesty is applicable also on speech. Speak about others as you would wish them to speak about you or your female relatives.
Since I began to write about different parts of my theme: the body, I have amused myself by considering these parts from different angles, not only the obvious. I’m challenging my mind to go further and dig deeper. Have you used the technique called mind mapping? A Mind map is a diagram used to visually organise information. Let’s say that you have a certain task and you don’t know what to do and how to do it.

Write the task on the middle of a piece of paper. Now begin to think of possible ways to reach your goal, write them down one by one and draw lines from each possibility to the goal. It is like a mind map with lines as roads drawn to the goal in the middle.
When I begin writing my article, I use this technique in a way. I make a note in my mind and that is the theme for the article, I continue by connecting my thoughts with the goal, which is to finish the article.

I have used this mind map technique many times so I don’t need pen and paper for making these notes. It is very helpful at the beginning and especially if you are part of a group which has the same task.
I find it easier to draw a kind of ”bubble” around the goal and the ideas. It is making it more clear and easier to read if you separate the goal from the different ideas or aims.
Can we combine the mind map technique with perfection? We can use it in as many contexts we wish, try and see. Begin with finding a goal, take a pen and write it down on a piece of paper. Let’s say that your goal is to become a great football player; write that down and every time you come up with something useful you write it on your paper and draw a line from that to your goal.

Many consider the Swedish football player Zlatan Ibrahimovic, to be perfect, young boys have him as their idol and role model. If you love to play football, and being good as Zlatan is your goal, then write that down and find your strategy.
Should we be seeking perfection or should we seek to be the best we can be? Who decides what is perfect? That is a matter of definition and I’m not going to answer that – it is up to you.

I began this article with speaking about a perfect look but I also know that those we consider as looking perfect use a lot of makeup, beautiful clothes and professional photographers for the result. They can even Photoshop the pictures, add details and delete others to make the picture more perfect than the reality. The models look like ordinary people without their makeup and exclusive clothes and if you would ask them about their looks they would always highlight their flaws instead.
Young women who consider these models as their role models need to know that all the great photos of these beautiful models are fiction, they have been transformed by a computer. The fake world of fashion is looking for something that isn’t there, the perfection, because we are unsymmetrical. The breasts don’t have exactly same shape or size, there is normally no gap between a woman’s thighs. The upper body can be a bit too tall compared with the lower body, but all this can be changed with a computer. People have got so used to these fake photos nowadays so it can be hard to adapt to the old-fashioned way where people look normal.

If you are a leader of some sort, or aspire to become one – maybe in the politics, then you need to put that in focus. Being a leader is not easy, and it comes with a whole lot of responsibility. A leader goes first and gets a lot of attention, good or bad. A leader must never put her or himself first and become occupied with its own importance. A leader must always put the followers first because if you choose the wrong path others will follow you there and suddenly you have damaged the life for a whole lot of people. A leader must be a servant, never a ruler.

What defines a perfect leader? Knowledge, empathy, integrity, visionary, flexibility, creativity are some of the characteristics you look for. When you think of a certain leader, are these the characteristics you see in that person? If that is the case it’s marvelous. If you are a leader, or wish to become one, do you see these characteristics in yourself? It can be hard to see yourself as others see you, but try to be true to yourself. Take advice from a leader you have confidence in, tell that person about your dreams and your aims. Ask that person which qualifications she or he can see in you and if you need to improve any of them.

It is necessary for every kind of leader to turn your eye to your inner qualifications, not only what you have written down on your CV. Your CV is a list of all your educations and your experience in the area where you wish to work. Hopefully everything you have added on your CV is true, and you haven’t exaggerated anything. It happens to most of us that we wish to appear a little bit better than we really are, but the truth comes and bites us in the behind sooner or later. Being a leader for a team somewhere on the countryside is not that hard, and if you tell the players that you have made much more goals in many more games it’s no big deal.

The big deal is if you want to become a leader of a political party, a large business or even a country. If you have lied about your CV then the truth will take a huge part of your behind when it comes to bite you. Don’t let the image of your perfection be the focus – focus on perfection within yourself and you will become a role model. Let your actions become stronger than your words, don’t search for pats on your back, applauds and people looking up to you. Remain on the same level as others, be a part of the context where you are working. Don’t think of yourself as someone special – be someone special instead.
I called this article: You are perfect because of your imperfections.

Isn’t that a strange thing to say, or? What does it mean? How can something that is imperfect be perfect?
Well, maybe it means that you are human, with your advantages and disadvantages. Your crooked nose or large ears or a missing tooth is a part of your personality. A small lisp when you speak of the impossibility of pronouncing a certain word correct is sweet and others couldn’t imagine you without it.Maybe you have been bragging about something and others have found out, but that doesn’t matter and will soon be forgotten. We are human beings, created by God, and he doesn’t care about your over weight or broken sandals, so why should we? Is it possible to look at ourselves and others as God sees us? Is it possible to think that people are okay even if they are not perfect? Are you perfect? I’m sure I am not, but I’m okay anyway.

Dementia discriminates no one