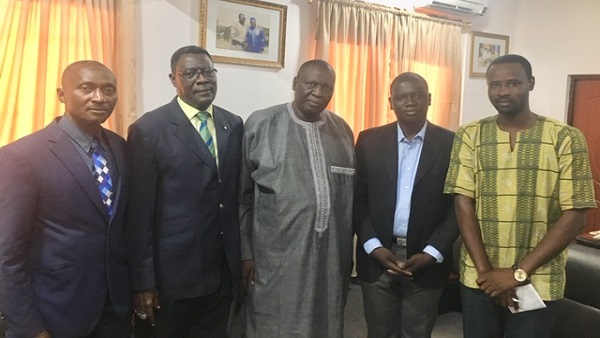 The Ambassador was speaking at his office when official from SJAG called on him to brief him about Saturday’s Award gala night which would be attended by Senegalese Sports minister Matarr Ba. Other top personalities coming from Senegal include coach Alieu Cisse, ex Senegal international Henry Camara and about 30 Senegalese journalists.
Receiving the SJAG president Musa Sise and delegation, comprising honorary life president Pap Saine, 1st vice president Uthman Jeng and Secretary General Alieu Ceesay, Ambassador Salif Ndiaye said
sports is a unifying tool with great potentials to bring positive impacts on the development of any nation. “The Gambia and Senegal can partner in many areas to develop sports including even collaborating to host African Cup of Nations”, he opined.
He assured his embassy’s support to the successful hosting of the event.

Musa Sise, President of the Sports Journalists’ Association of The Gambia said the event is meant to celebrate the achievements of the sportsmen and women.
On the SJAG-ANPS partnership, Mr Sise informed High Commissioner Ndiaye that the two associations have over the years enjoyed a cordial friendship. “We share our [sports press associations’] common challenges and the way forward for sports in our countries. We have also been each other’s events.”

Share
Facebook
Twitter
Pinterest
WhatsApp
Previous articleIMF COUNTRY FOCUS -The Gambia: 2017 Article IV Consultation and First Review Under and Extension of the Staff-Monitored Program with The Gambia-Press Release; Staff Report; and Statement by the Executive Director for The Gambia.
Next articlePapa Reacts To Egyptian Fans Rudeness With Calm
Join The Conversation