Mayoral hopeful Assan Martin has outlined major details of his plan to bring change in the Kanifing Municipality, saying ‘KM must be fixed’.
The human rights lawyer has launched a bid for leadership in Gambia’s biggest and richest municipality as he promises to make change a reality.

“Over these past years, KMC has gone through maladministration and mismanagement. There is an urgent need to fix this situation,” lawyer Assan Martin told this reporter in an exclusive interview.
As one of the few lawyers who stood up against Yahya Jammeh’s 22-year of dictatorship, Assan Martin is vying for mayorship under an independent ticket. He has vowed to create a political earthquake that would put a complete halt to the era of mismanagement at the KMC.

Lawyer Assan Martin expressed his resolve to cut ‘endemic corruption’ with a rigorous plan geared toward restoring financial sanity in the way the KMC is being managed.
“I am looking at fighting corruption that has become a serious impediment in the Council. We will make sure KMC becomes very efficient in ensuring that the revenues collected will be invested back to the people,” he added.

Martin further stated that he will spare no efforts to maximise the revenue potential of the municipality in shutting down loopholes that allowed malpractices to take place.
“We have to change the culture of collecting taxes and other fees enacted by the National Assembly,” he said.
Martin promised to put up a proper

Taking a realistic stance, the London Corner-based independent candidate made it clear that his primary focus will be to set up a 200 million budget designed to boost services delivery in the KMC.
As the Bakoteh dumpsite continues to draw mixed reactions, lawyer Martin said its relocation constitutes an issue of utmost importance.

tive site,” he said. “Our aim is to work on sustainable ways of addressing the issue of refuse management,” he assured. 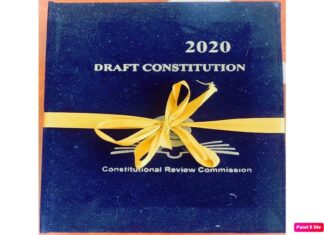 March 1, 2021
The hottest topic in this country today is no doubt the ongoing efforts to resuscitate the 2020 Draft Constitution, which failed in September 2020...