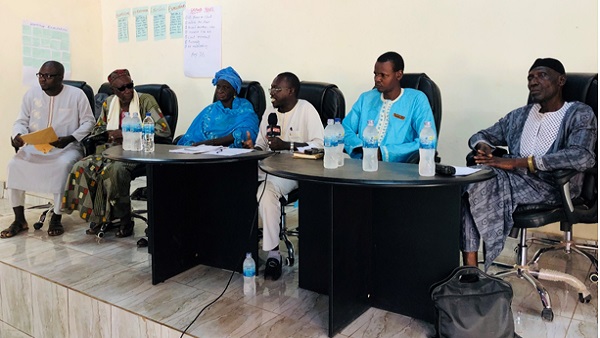 The multi-party engagement event was organised by Beakanyang, a human rights and development NGO with support from the International Republican Institute, IRI.

In his welcome remarks, the executive director of Beakanyang, Nfamara Jawneh, said the pre-bantaba was a preparatory event ahead of their forthcoming districtbantabas in the region.

According to him, participants of the pre-bantaba session will learn more about political tolerance and pluralism and develop peace messages to be used during the bantabas.

Beakanyang boss commended the IRI for supporting the pre-bantaba and other activities of the organisation in the region.

In his opening remarks, the deputy governor of URR, Samba Bah applauded Beakanyang and its partners for organising such an important event in the region.

He said that since people cannot buy peace it’s everyone’s responsibility to maintain it.

He blamed the political intolerance among political supporters on lack of political awareness and maturity.

Bah urged the participants to take the workshop seriously and to also share the knowledge and message gained from the forum with their members and wider society.

For his part, Seedia Jatta, National Assembly member for Wuli West, decried politics of insult and vote buying, adding they are dirty politics. He reminded the people gathered about the Rwandan genocide during which hundreds of thousands of people were massacred.

“We cannot all support one political party or issue but what is more important is to note that all parties want peace and party supporters should equally embrace peace,” he said.

The veteran politician urged people in the region to love each other and put aside their political and other differences for the development of the region.

“We must ensure political tolerance if we want to live in peace with one another and use politics as a tool for development,” he added.

Speaking earlier, the chief of Basse, Alhagie Hammeh Minteh Krubally, hailed Beakanyang for promoting peace in the region and beyond.

According to him, the forum was timely and relevant for the people of the region considering the recent happenings in the region.

He further stressed that issues such as political conflicts and problem resulting to the case systems must be stopped and addressed once and for all.

“Your presence here today is a clear indication of your commitment to nurturing peace and development not only in your constituencies but URR in general,” he noted.

Chairperson of Inter-Party Youth Committee of URR Alieu Kebbeh commended Beakanyang for partnering his committee to promote peace and social cohesion in the region.

The forum was attended by about thirty participants including representatives of all active political parties in the region, national assembly members and inter-party youth committee members.

Fanding Barrow, a board member of Beakanyang, chaired the opening ceremony and reaffirmed the organisation’s commitment in complementing government’s efforts in national development.