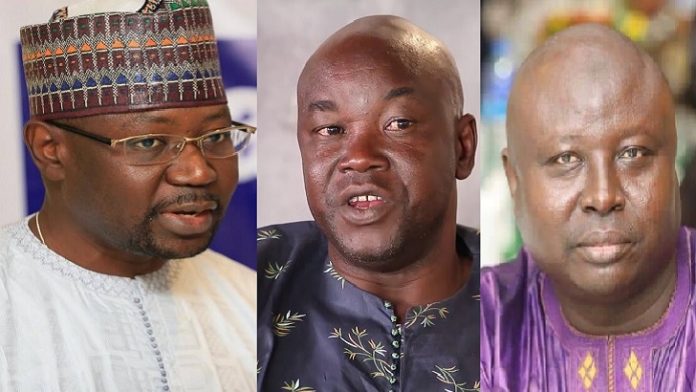 The president’s deputy political adviser has sharply reacted to comments by Mai Fatty that President Barrow should fire all his advisers, saying the GMC leader is “an ungrateful disgruntled politician who now finds it fashionable to bite the finger that fed him since he is no longer in the system”.

Mr Fatty who himself served as a special adviser to the president, said the four advisers and two deputies in the president’s office are “mere political operatives” who lack morals and professional ethics to serve as public office bearers. He consequently advised the president to move them to his National Peoples Party and in their place hire better people.

Speaking to The Standard yesterday, Sanno hit back: “I want to remind him [Fatty] that the people he is accusing of lacking morals and ethics to run public offices are the same people who rescued him from the clutches of Yahya Jammeh’s brutality and when Jammeh sent him away, it is the same people who fought tooth and nail to enable him return home from exile by putting an end to Jammeh’s misrule.”

According to Dou Sanno, it was relevant to remind Mai that the very people he described as devoid of morals were the same individuals who contributed to his elevation to ministerial and advisory positions in the government.

He explained that during his stint as adviser to President Barrow, Mai had never raised any reservations about the work of presidential advisers and had in fact confided in him that The Gambia’s future was bright with people of his [Dou’s] calibre in the government.
“He never called for our removal when he was in the system. If it comes to morality, love for country and contribution to national development I have made more contribution than Mai. What matters to the majority of Gambians is progress and development and as a government we are doing our utmost to rise to the challenges of bringing development to the doorsteps of Gambians,” Dou Sanno pointed out.

He chastised Fatty for lacking the “maturity both as a politician and an individual”.
“You cannot wait until you are out of the system and start making noise. It is quite clear that he did not quit government on his own volition,” Sanno charged.
He alleged that Fatty left the government because “he was unable to square up to the enormity of the task given him and could not add any value to the administration of the state”.

He stated that it was mere grandstanding on Fatty’s part to want to appear erudite to the people “when he had shown every incapacity” to stand up against the dictatorship.
“You cannot brag of your knowledge by trying to deceive the locals when you could not stand against a dictator. You should keep quiet because the knowledge you are bragging of had not and would not benefit Gambians in anyway,” Sanno said.
According to Sanno, Mai Fatty “is apparently irritated” with him [Sanno] after he got one of the GMC kingpins, Momodou Sidibeh, to join the NPP.

“With my primary school education, I was able to get his top adviser to join the party of peace, progress and development. I was never willing to tear up his party but due to his lack of political maturity with no recognised boundaries, we will continue to hit each other until the truth is established in the best interest of the nation,” he concluded.

‘Gloom-ridden comments’
Mr Siaka Jatta, a political adviser to the president also told The Standard yesterday: “The gloom-ridden comment Mai Fatty made about his former colleague advisers is unfortunate and says a lot about him as an individual and a professional.

“One is tempted to ask, where is his integrity, honesty and ethical values? This is the guy who until three months ago was serving as the president’s special adviser while leading and conducting the affairs of his political party. Therefore, for him to label serving advisers as ‘political operatives’ sounds more like the plot of the all-time Hollywood drama series: “Hypocrisy 101”.

“His nine-month tenure in office is public knowledge. He reaped the benefit of the office, yet he gave nothing in return. Instead, he used the perks of the office as a means to resuscitate his dying political career and embarrassing public persona. If anyone wants to take moral lessons from Mai Fatty, please be my guest. As advisers we serve at the disposal of our principal, and as far as I know, the president of the republic is well pleased and confident in the job that advisers are doing.”