Ebou was so excited about The Gambia three years ago. He called me and asked if I was already packed. I asked “packed for what” and he responded “packed to go back to our country”. I laughed and said it is never that easy. At the time, I too harboured thoughts of going back home but I know of at least two individuals who returned to The Gambia only to come back to the West within three years.

When I mentioned this to Ebou, he told me things will be different because “it’s a new dispensation” and hope abounds. He told me he was already packing up. He was so hopeful. So buoyant. So excited. He could not wait to be home. His home. The Gambia. Ebou planned it all out, got his home ready, shipped a car, started a business here and left something back in Canada to sustain himself until he finds a job. He didn’t want to rely on the business he started in The Gambia. “You can’t be taking money from your new business until it’s able to sustain itself three times over,” he advised.

He shipped all that he thought he would need in The Gambia. He had it all planned out and consulted heavily with friends and family. He laid out his. But like they say about war, plans go out of the window when the first shots are fired. Most plans about returning to The Gambia go out the window the day you land at the shoddy airport! Ebou was not to know this. He worked too hard on his plan and it is tamper-proof.

The joie de vivre innocence of yesteryears. He told me he could not wait to see the bright red insects that only come out in the rainy season. The smell of the earth when it rained. The sound of rain as it bangs on the corrugated irons up above. He told me of Sanjano season in his hometown. He told me of Banta Fanno. He told me of Nawettan. Of Noran. Of football tournaments. Of fresh peanuts. Of roasted corns. He spoke of Gambia. The Gambia he left behind so long ago to subsist in Canada for over a decade. The dawn of the new era was an omen for good he was convinced.

He kept peeking out the plane’s windows to catch a glimpse of his Gambia; smiling from ear to ear. He is home. His home. His Gambia beckons. The plane landed. He could not wait to plant his feet on home soil. He gathered his things and disembarked. As soon as his feet touched The Gambia’s soil, he knelt down and kissed the ground. A kiss of the motherland. A kiss of hope. A kiss into the unknown future. A future he banked everything on. It’s a new dispensation he said. A new dawn. We are free at last Ebou says.

Even nature was not kind to his home. But he was not to notice. The tired bus that felt like a bakery could not dampen his excitement. Even the throng of people hassling one another to get in front and pushing children in the chaos could not temper his exuberance. The smell of sweat freely mingling with the humid air and dust that hovered will not discourage him. He was home and he was home. That was all that mattered. The man was home.

The immigration officer, sweating in his yellowish shirt barely looked up as he processed his documents. His face, tired from so low a salary. His motivation for work could not have been lower. The lack of morale supplemented by a desire to stay afloat financially and doing whatever it takes. But Ebou was not to notice these signs. Its a new dispensation!
He went to get his luggage and asked someone which carousel their luggage swere. The man looked at him and pointed to the only carousel that screeched as if it bore the burden of hell on its dusty belts.

After he picked up his luggage, men in tired-looking uniforms and sunken cheeks came at him all determined to carry his luggage. They almost fought one another just for the opportunity to carry another man’s luggage. The level poverty reduces some to. He chose one of them and out of guilt, gave some money to the others so they can share it among themselves. Their mood changed and they all scrambled to go change the 100 dollars. Two others, who were not part of the initial group, joined them to get their share. A small dishonest act but Ebou was not to notice this…
Then Ebou’s first surprise hit him when he was called out of line to… 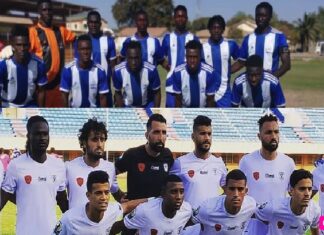