Elegance Magazine is back with Sir Dawda Special 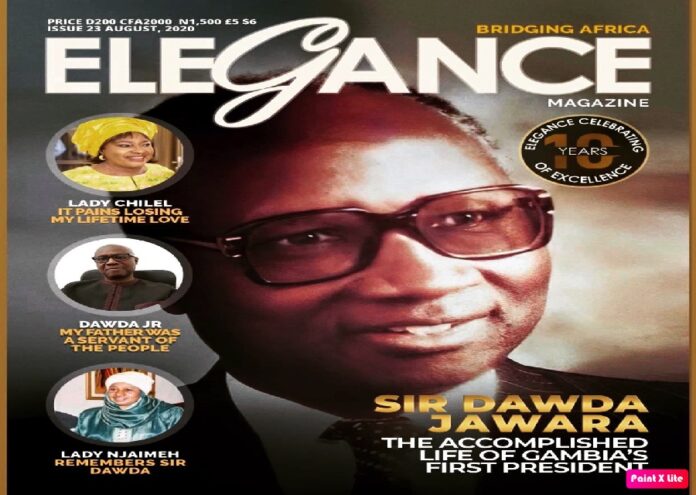 Glossy Gambian affairs Magazine Elegance, is back after a six-month break following the outbreak of the Covid-19 pandemic with a special edition on the Father of the Nation, Sir Dawda Jawara who died one year ago. The Magazine carries exciting features of many untold stories about The Gambia’s first president, his time and achievements.

It also contains testimonies from his family, friends and tributes from Gambian active voices such as Siga Jagne, Musa Jeng, among others and a fascinating rare interview with his widow Lady Chilel, who, for the first time spoke exclusively to Elegance pouring out her heart in recollecting a life partner.

Hear her: “When I observed that he wasn’t breathing, the family hid that from me, until Dr Njaimeh walked me to the door to say unfortunately, I don’t want to say this but we have lost our father (cried)”.

His son, Dawda Jr, similarly gives a memory of his father, saying: “Many people may not know this, but he was very humorous and it was great fun to be with him”.

Also featured in the magazine is Sir Dawda’s last chief of protocol Ebou Ndure, who remarked: “Sir Dawda was a perfect gentleman, a man of substance, good etiquette, savoir-vivre, and full of wisdom.”

Elegance Magazine is published in London by Chilel Sarr and will soon be available on the newsstand in The Gambia. It is already on sale in London and can be seen at www.elagance.