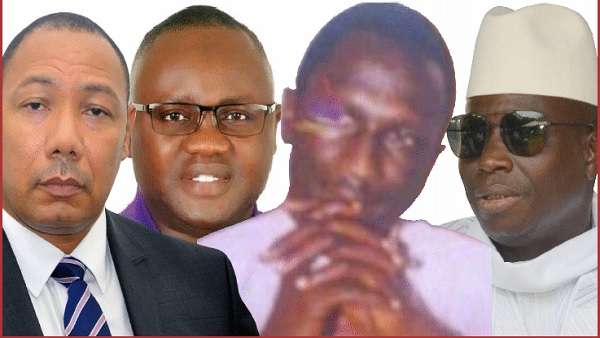 The former AFPRC junta spokesman, Ebou Jallow, has rejected the Janneh Commission’s recommendation for him, Edward Singhatey and Yankuba Touray, to return alleged stolen monies belonging to the state in the sum of ($32, 220, 000).

He argued that neither the Janneh Commission nor President Adama Barrow has the Constitutional power to punish him or any Gambian.

The trio have also been banned from holding public offices in the country, as well as declared unfit to manage or run any state enterprise for the rest of their lives.

“The President has no constitutional power to rely on an opinion of a Commission to punish people.

They should tell Gambians the truth because when they were setting up the Commission, they knew very well that the Constitution has Transitional and Consequential Clauses,” he said in an exclusive interview with Star FM yesterday.

He said the clauses which give the junta members immunity from prosecution are embedded in the Constitution, arguing that only the Gambian people can remove those clauses.

“Those clauses were written by very seasoned Ghanaian legal experts.

I went to Ghana together with Koro Ceesay to negotiate for that during the time of Jerry John Rawlings,” he added.

He alleged that the $33 million Taiwan loan was transferred directly to Jammeh’s bank account.

“When we were going to Taiwan, I was not expecting to receive money on behalf of The Gambia.

I was given an official letter which confirms me as Ambassador Extraordinary to negotiate the reestablishment of diplomatic relations between Gambia and Taiwan,” he stressed.

He said after re-establishing the ties they signed an MOU after which Taiwan provided them with a loan of $33 Million.

“I neither negotiated nor signed the agreement.

I have tried my best to explain myself but the Commission is not willing to listen to me.

They refused to give me the opportunity to explain.

It has nothing to do with me.

If you go to the Central Bank’s record you will not see my name and the Commission has no documents to prove their allegation,” he added.

He said he was framed by Edward Singhatey when he tried to get him prosecuted by Jammeh for his participation in Koro Ceesay’s death.

The former Junta spokesperson said the $33 million Taiwan loan has nothing to do with Koro Ceesay’s death, arguing that Koro Ceesay died in June before they traveled to Taiwan in August.

“Whosoever associates Koro Ceesay’s death to the $35million is lying.”

“I was with Jammeh and Edward Singhatey when the former secretary general Mustapha Wadda entered the office with papers which he handed over to Jammeh and after reading the papers Jammeh laughed and asked the SG to change something on the papers.

So, after that Jammeh got up and said to me ‘your man is going’…I asked him who? He said to me Serigne Darra referring to Koro Ceesay because that is how we used to call him.

I asked him whether he is going to be fired but he said he will explain to me later.

So, the last thing I know about Koro Ceesay is that Jammeh wrote a dismissal letter for him to be sacked…He wanted to sack him because Jammeh has received lots of complaints about Koro but it has not reached the stage where Jammeh would order for him to be killed,” he explained.

“When I was coming from Libya, I took a flight to Rome and then Zurich; coincidentally I happened to join the same flight with Jammeh.

he knew I was around, he sent for me.

When I arrived, I found him and Tuti Faal looking at different directions.

`I asked him what happened.

He told me it was about Koro Ceesay.

I told him Gaddafi explained something like that to me.

That was the time he said to me Edward has killed Koro Ceesay.

I said to him what? He asked me not to say anything until we reach home,” he said.

He said during his time working under the AFPRC he has never heard Jammeh ordering for people to be killed.

“I am not saying it never happened but I was never present.

Even the November 11 killings, there is no evidence that Jammeh ordered for the killings,” he added.