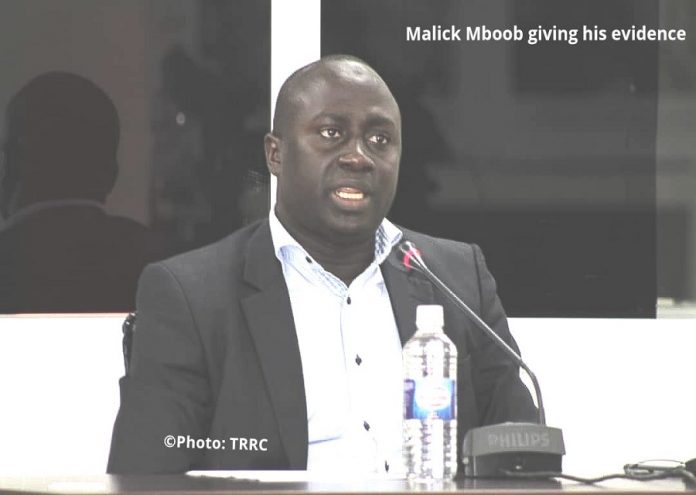 A former news editor of the Daily Observer Newspaper, who was arrested in connection with the Freedom Newspaper saga in 2006 yesterday narrated his ordeal at the NIA, the torture chambers of former president Yahya Jammeh.

Like most detainees before him, Mboob who was incarcerated for several months also explained how former members of the ex-president Jammeh’s hit squad, the Junglers led by Musa Jammeh tortured and threatened to bury him alive when he refused to change his statement to implicate himself.

Mboob who later became PRO of the Royal Victoria Teaching Hospital now works with the GT Bank told the commission that he was a principal suspect amongst dozens of journalists and other professionals arrested for allegedly leaking information to the Freedom Newspaper in the US and other bogus allegations.

He said he was paraded before an investigation panel that comprised senior security officials who subjected him to intimidating sessions.

“They tried to force me to change my statement but I refused because I had no idea of their allegation and the beatings started,” Mboob claimed.

He said as a result of his refusal Musa Jammeh promised to give him a VIP treatment for his reluctance to admit being an informant for the Freedom.

“He asked Ismaila Jammeh, one of the junglers to lead me to the torture chambers where I was told to sit on the ground and my clothes removed.

He further disclosed that the Junglers threatened to kill or bury him alive as they descended on him and started beating and stamping him for about half an hour until he pretended to be dead.

“They stamped on my body with their military boots, used sticks, and their fists in the process in beating.

I bled all over my body and cried until I could not cry anymore,” he said.

According to him, Musa Jammeh commonly called Malyamungu received a call in the middle of the session from State House to find out his condition.

Mboob said his survival trick of playing dead made the soldiers stop.

He said Ismaila Jammeh saved his life because he advised him to make some tricks pretending to be dead and that scared the junglers to cease the tortures.