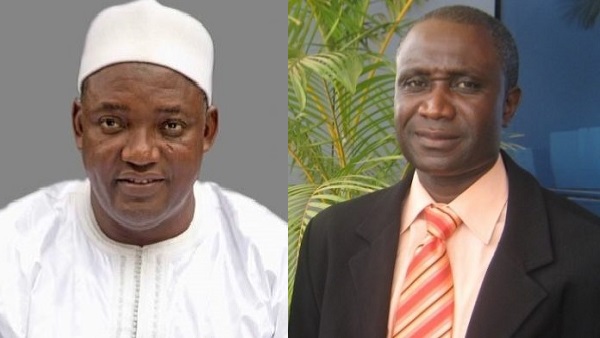 In this article I refer to another article, published in this newspaper in May 15.
I had to read that article several times before I managed to get something out of it. Henry Gomez made a statement that The Gambia can’t afford to vote Barrow out. His statement didn’t give us any facts or good reasons for why Barrow should remain president for 5 more years. I found his statement more of a desperate attempt to remain in the power that is giving Mr Gomez and his ilks a lot of benefits. I will give you some quotiations from the mentioned article:
“Presidential adviser on youth matters, Henry Gomez has said Gambians cannot afford to vote President Adama Barrow out in 2021.”

Really? Can we actually afford to keep him as a president? What has he done more than put the country in deeper debt than before? Our sleeping president is not known for rolling up his sleeves to get to work. Rather he is rolling away from the food table where he has had one delicious meal after the other—at the expense of poor Gambians. I wonder if he gives you a thought when he hears about your struggle to get at least one daily meal. Considering his lack of action to improve your living conditions, he seems to be both blind and deaf. The Gambia can’t afford to vote Barrow out? Quite the opposite, Mr Gomez, we can’t afford to keep him, you and others of the same kind to decide the fate of poor Gambians. You saying that only shows your ignorance and arrogance.
“Gomez said his party and all genuine Gambians will rally behind President Barrow again in 2021 to make sure that he wins a second term because this country doesn’t change presidents in every five years”.

All genuine Gambians? Who are they? Are they different from the people you see on the streets? Is there any test that can be taken to prove that someone is genuinly Gambian? A blood test, perhaps? How is it possible to confirm that someone is a genuine Gambian? What about all the mixed families? What happens if someone’s mother is from Guinea Conakry and the father is from Mali? Even if the offspring is born in the Gambia – can he/she be considered as a genuine Gambian? How far back in the bloodline must we go? Is it enough with one generation, or must we go further back?

What characterizes a genuine Gambian? Is it the faith, the shape of one’s nose, how you vote or where you live? Can you be considered as a genuine Gambian even if you live in the diaspora? Mr Gomez, you need to think before you open your mouth, that is always a good advice. You must be prepared for questions like mine, because we are plenty who have been scratching our heads when we read your statements.

“The GPDP leader said Gambians should know that President Barrow and his ministers are not our slaves, they are only our servants and we must respect them. Barrow is no one’s slave and he has a family and whosoever wouldn’t want your father to be insulted you shouldn’t insult someone else’s father”.

Now, now, dry your tears, Mr Gomez. This is truly a touching story, but I don’t think anyone is thinking of Barrow as a slave. Is that what he feels when he wakes up from his nap and must do some work? Oh, poor man! Don’t worry, this can be solved in an instant. Just decide to step back next year and leave the job for someone who is capable.
“People should start treating politicians with respect. If anyone wants to go to State House, you have to wait for the election and tell you one thing, the 2021 election will be history in this country because whether we like it or not President Barrow will win it. Whosoever doesn’t want to hear that can go to self-exile,” he told a local radio program.

I thought The Gambia is to be considered a democracy nowadays, but I might be wrong. According to Mr Gomez we are not allowed to have a second opinion. What not be blunt and say:” Do as you are told, or p**s off! Mr Gomez doesn’t seem to understand that his arrogance is affecting his case, because people don’t want to be told what to vote for. It is our free will and our constitional right to vote for whoever we feel fit for being the next president.

“He (Mr Gomez) argued that Gambians should be grateful to President Barrow, when he does anything commendable, like the recent releasing of over 100 prisoners and the purchasing of Covid-19 food aid.
We have to be grateful. We all know where we are from and where President Barrow has taken us. Wanting to be president would not make anyone of us president. Those who are forming political parties just to make up the numbers should ask themselves whether they would have been able to do so under Yahya Jammeh. We must stop being hypocritical,” he added.”

This is the part where I really had to stop and read it several times. ”We have to be grateful.” Eh? Barrow is doing what he is supposed to do, it is not like he is doing us any favours. ”We all know where we are from and where president Barrow has taken us.” Yeah, we are from the Gambia and Barrow has taken us in deeper debt than before! Grateful? Don’t think so!

“Wanting to be president would not make anyone of us president.” No, but Barrow is desperate to remain president and does that make him the right person in that position? Nope! ”Those who are forming political parties just to make up the numbers” understand better than that. There must be a change for the better in The Gambia, that is what the new parties are working for.

“The presidential adviser also took time to warn those responsible for distributing the Covid-19 aid against tampering with the food items.
“Anyone found wanting of selling government Covid-19 food aid will be seriously dealt with. We cannot allow one person to enjoy what thousands of people should benefit. That will not happen”.

I wonder how many Gambians have got anything of the Covid-19 food aid. Considering the desperate situation I think that those who have got nothing are keen to feed their family with it first of all. Hunger is a stronger force than greed for poor people. It is those who never need to go hungry, who can afford to be greedy. How many of the sacks of rice President Barrow was posing with, really benefited those who were in the deepest need? If you distrust your fellow Gambians, Mr Gomez, maybe there is where you need to begin your search.

With Alagie Manneh You came into prominence as a radio presenter. Tell us about your experience as a young journalist working in a hostile media...
Read more
Bantaba

Is there a straw hat large enough for Hamat Bah to hide himself under? This Minister of Tourism and Culture has a habit of...
Read more
Bantaba

With Alagie Manneh Your family hails from Penyem, a village not far from the Senegalese border, are your people originally from Casamance? Bakary Badjie: When you...
Read more
- Advertisment -