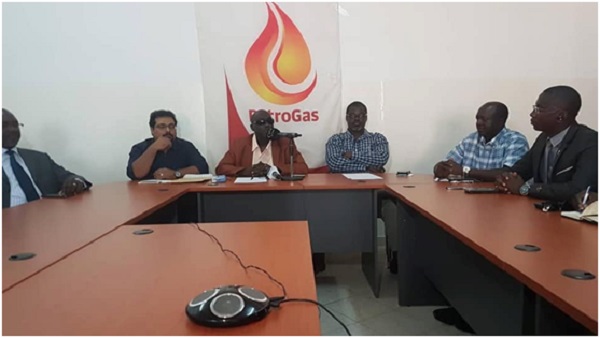 The Gambia Football Federation (GFF) this week formally signed a deal with Petro Gas Company for the financing of a six-month pilot grassroots football programme for girls in the school system.
The ceremony was held at the Petro Gas Head Office in Banjul.
Speaking at the occasion, Petro Gas Managing Director Mr. Lang Conteh said they are very pleased to once again associate themselves with football, particularly at the national level. “It’s traditional and natural for us at Petro Gas to be associated with football and I want to assure you that our doors are always opened for partnership,” he said.

The Director of Finance Sebastian Thomas described the partnership as a great opportunity for them to contribute their quota to football development. “We will do everything possible to make sure that the partnership is positive and we are pleased to associate with the GFF.”
The GFF Third Vice President of the GFF, General Lang Tombong Tamba said the GFF has a vision to develop youth and grassroots football because that is the bedrock of any country’s future national team.

The President of the GFF, Mr. Lamin Kaba Bajo thanked Petro Gas for the partnership. He said the potentials in women’s football are many and this new deal will help realized such potentials of the project.
Mr. Bajo thanked the Project Coordinator Monika Staab and her colleague Sainey Sissohore for a hard earned job and commitment towards the realisation of this partnership.
Within the framework of the MoU, Petro Gas presented a cheque of D180,000:00 (One Hundred and Eighty Thousand Dalasi) paid to the GFF in installment of three months with a break in of D30,000:00 (Thirty Thousand Dalasis ) for each month. There is also a supply of two hundred and fifty T-shirts for the project.