Global finance and economic news The IMF post-Lagarde: How to keep up anti-corruption momentum 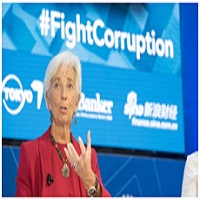 On 12 September, Christine Lagarde steps down as Managing Director of the International Monetary Fund (IMF).

Will this signal a retreat from the IMF’s focus on anti-corruption work?
In recent years, the IMF has repeatedly demonstrated its ambition to play a leading role in tackling corruption worldwide.

Under the leadership of Christine Lagarde, it made public commitments at the 2016 UK Anti-Corruption Summit and during the High Level Segment of the 2018 International Anti-Corruption Conference (IACC) in Denmark.

In April this year, the IMF’s Fiscal Monitor report focused specifically on curbing corruption, alongside the usual recommendations for governments’ public finance policy.

The IMF has also been an important voice in support of anti-corruption efforts at meetings of the G20 Anti-Corruption Working Group. Last year, the Fund launched a new framework for engaging with countries on governance and corruption issues.

Even if we in civil society would like to see the IMF do much more, these steps are a significant departure from the role it has traditionally played.

It is now clear to everyone that none of these goals can be achieved when corruption is allowed to flourish.

The Fund’s new framework is a recognition of that

. Measures taken by countries to facilitate trade or strengthen sustainable development are unlikely to succeed if they fail to reduce corruption risks at the same time.

This means concrete measures to increase transparency, integrity and accountability.

The new framework should be a way of assessing that and proposing specific policy recommendations.

The IMF still has a long way to go to address corruption in its reviews of member countries “systematically, effectively, candidly, and in a manner that respects uniformity of treatment,” as it has committed to do.

The development and implementation of a clear, transparent and strong methodology for country reviews is an essential step.

Civil Society can help deliver this goal. Transparency International (TI) is developing our own proposal for just such a methodology, with specific corruption related indicators in the areas the IMF will be assessing: Tax Administration, Public Finance Management, Public Procurement, Central Bank Oversight and Regulation, Rule of Law and Anti-Money Laundering.

Institutions, legislation, enforcement
A key strand of our recommendations is transparency over who actually owns companies. The IMF could make significant anti-corruption gains by assessing whether the ‘beneficial’ (i.e. ultimate) owner of a firm is clearly defined, with information available to the public in a free online register verified by the authorities.

Secondly, the IMF could far better address the scourge of bribery by multinational companies if it reviewed members’ legislation and enforcement against both active and passive foreign bribery, and the consequences of such crimes.

Thirdly, the IMF could help strengthen the rule of law in a country by checking for clear and transparent recruitment standards for judges and other court officials, and measuring procedures against international best practices for promoting judicial integrity.

Critically, corruption is not an add-on issue that can be dealt with in isolation. Any state function analysed by the IMF should always take into account and incorporate corruption risks and countermeasures.

This is not an area that can easily be tackled during a typical country visit, and it would be naive to rely solely on government self-assessments.

The IMF, and specifically its outgoing Managing Director, have recognised civil society plays a crucial role in the fight against corruption.

Unfortunately, the Fund does not have a coherent policy for engaging civil society in country reviews, and different member countries take different approaches.

The anti-corruption community includes innovators, technologists and policy experts that can add value, as well as balance, to a government’s own assessment.

In our experience, recommendations from international bodies alone are rarely sufficient to lead to actual change.

Sustained civil society engagement is essential to hold governments accountable to the people they are supposed to serve.

Clear, global thinking
Corruption in one country is often facilitated by weaknesses in the anti-money laundering frameworks of another; what the IMF calls “spillovers”.

It is time for the Fund to explicitly recognise cases of negative spillover effects. Greater clarity is also needed on how and when the IMF assesses corruption risks to be “macro-economically critical”.

Their own research shows that, around the world, corruption deprives state budgets of US$1 trillion annually.

One might ask: “When are corruption risks not macro-economically critical, particularly in the long run?”

Next steps
In the 1990s, when the IMF was establishing its governance framework, and Transparency International was in its infancy, the challenge was to put corruption on the agenda, to simply get it recognised as a problem that needs addressing.

Now, in 2019, it’s acknowledged that sustainable development and poverty reduction are undermined by corruption.

We have global agreements and frameworks, national laws and political commitments to address corruption.

The implementation of these is, at best, inconsistent.

It’s time for governments and other institutions to implement their many existing anti-corruption commitments. It is critical that the incoming Managing Director of the IMF champions this agenda, ensuring both continued prioritization of anti-corruption, and progress in the way the IMF engages with the issue.

Encouragingly, she has spoken about the importance of the anti-corruption agenda on several occasions.

If we are to address some of the greatest challenges of the time, whoever ends up in the hot seat must seize the opportunity to strengthen the Fund’s critical role in ending corruption.

*** These are indicative figures as per the 16th. September, 2019.
THE COMMODITY MARKETS IN THE GREATER BANJUL AREAS

SUCCESS QUOTES
“I’ve come to believe that each of us has a personal calling that’s as unique as a fingerprint – and that the best way to succeed is to discover what you love and then find a way to offer it to others in the form of service, working hard, and also allowing the energy of the universe to lead you. ”
By? Oprah Winfrey
Embrace your uniqueness. You are different, your gift is special – own it and unapologetically share it with the world.

“Real integrity is doing the right thing, knowing that nobody’s going to know whether you did it or not.”

By ? Oprah Winfrey
You know you reached a high level of intergrity when you don’t even care if people know or not. You just do it.

“Self-esteem comes from being able to define the world in your own terms and refusing to abide by the judgments of others.”
By ? Oprah Winfrey
A true sign of confidence is when you are able to break away from he crowd, regardless of what others say or think.