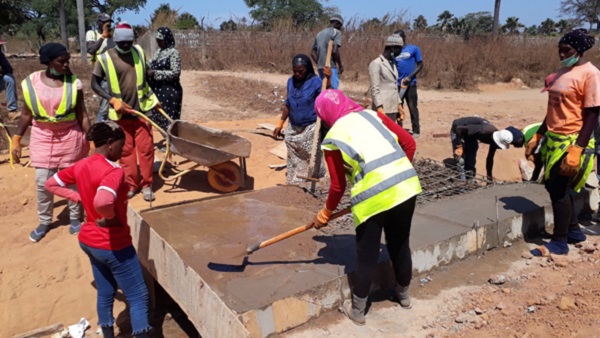 Young women and men were drafted to partake in the development of an access road in Gunjur from the highway to the fish landing site, as the International Labour Organisation (ILO) partnered with the Ministry of Trade, Industry, Regional Integration and Employment (MoTIE) to revamp the fisheries sector of The Gambia.

The range of the land worked on spanned across 2.5km, and was sponsored by the Japanese government through the Community Road Empowerment Project (Core), an international NGO, as part of the “Don-nou” technology, which used sandbags to create safe water ways.

Hundred and twenty-five young people benefitted from the project. It is believed that even during the rainy season, the good impact of the work would create paved accessible roads for commuters in the area.

Completed on April 27, 2019, the project employed 50 percent of both men and women, which is a clear demonstration of the partner institutions involved of their commitment to gender equality and inclusivity. Among the women employed, 5 were working-mothers, while one was 5 months pregnant. The project, from the financial benefit, material and moral experience they gained, would go a long way to help them in terms of job, finance and skills, hence alleviating poverty.