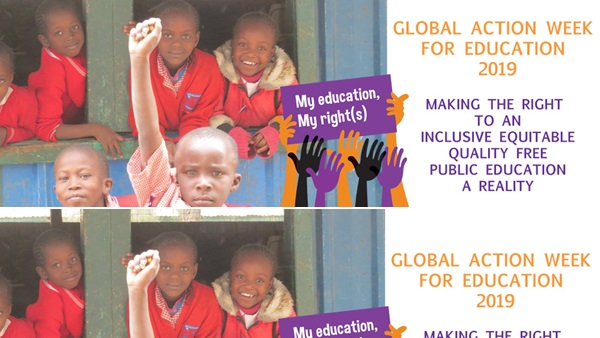 Education for all Campaign Network (EFANet) The Gambia, recently joined the rest of the globe to commemorate Global Action Week for Education. Events marking the week was staged in Kerewan, NBR.
The day marked the 16th anniversary of the week which commenced in 2003.
The one week event focused on making the right to an inclusive, equitable, quality, free public education a reality.
Under the slogan “My Education, My Right(s)”, the initiative supported citizens and communities to claim their right to education, encompassing the realisation of the full SDG4.

The week is to remind world leaders of the promises made in the Dakar Framework for Action in the year 2000 to meet the education for all goals.
Bakary Badjie, board chairman of EFANet, said this year’s overarching themes and slogans were to intensify the effort of citizens and civil societies to judiciously hold governments and other authorities accountable in the delivery of SDG-4 on quality, inclusive and public transformative education as a UN global commitment.

According to him, EFANet as a civil society coalition is aware of the provisions and sustainable promotion of inclusive and public transformative education as an integral part and enabler of the 2030 sustainable development goals.
“EFANet is fully committed to recognise and promote access to inclusive quality education as an important tool in partnership with government through MOBSE, MOHERST, and other partners to attain other sustainable development goals and empower those who are left behind in accessing education,” he said.

Ebrima Dampha, NBR Governor, spoke on the importance of education. He said it is key to national development, and the “best weapon to self-development”.
Modou Jagne from the Ministry of Women’s Affairs, said “major progresses have been made towards increasing access to education at all levels and increasing enrollment rates in schools particularly for women and girls”.
Basic literacy skills have improved tremendously, he added.

Jagne said The Gambia is one of the countries that have attained gender parity at basic level, registering an increase in the Gross Enrolment Rate (GER) for girls from 89.1 percent in 2010 to 98.7 percent in 2017.
“The reason for slow progress in the attainment of quality education is due to inadequate trained teachers, poor conditions of schools and equity issues related to opportunities provided to rural children,” he disclosed.