The Standard
26.1 C
City of Banjul 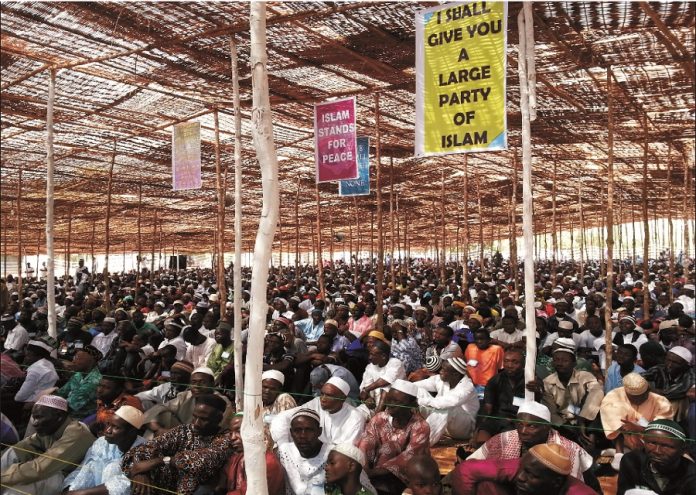 In December 1891, a small conference took place in a small village called Qadian, Punjab, India. The Conference was organized by Hadrat Mirza Ghulam Ahmad, the Founder of the Ahmadiyya Muslim Community. This conference was attended by seventy-five people. It was the Jalsa Salana or Annual Convention.
This convention continued to take place until the time of the demise of the Promised Messiah. When he passed away in 1908, he was succeeded by his Khalah who still continue to hold this convention.

Later, when India and Pakistan became separated, the Khalifah moved to Rabwah, Pakistan where the Jalsa Salana continued to be held. The last Jalsa held in Rabwah attracted over three hundred thousand attendees.
Due to persecution and bad laws, the Khalifah of the Ahmadiyya Muslim Community had to migrate to London, United Kingdom. It is there now that the International Jalsa Salana takes place attended by people from all over the world.

What Is Jalsa Salana?
Jalsa Salana literally means Annual Convention. It is a convention organized by the Ahmaddiyya Muslim Jama’at all over the world. It brings together Ahmadi Muslims and non-Ahmadi Muslim to discuss issues of faith and spirituality. This is to ensure that they progress in their spiritual and moral journeys.
According to the Founder of the Ahmadiyya Muslim Community, the purpose of Jalsa Salana is to rekindle the fire of love of God in the hearts of men and turn cold the love of the world. It is to grant the members the opportunity to worship God sincerely so as to bring about a pious moral change in their lives. The second purpose, according to the Founder, is to create a loving relationship between and among the believers.

Moral Benefits
In the Jalsa Salana, participants are urged to obey the rules and regulations set forth by the organizers. For instance, the men and women in this convention do not mix as this is not in line with Islamic teachings. So, all participants are expected to respect these rules so as to ensure that a truly Islamic atmosphere is created.
Participants are expected to behave with discipline and responsibility. Everyone is expected to be at their best behavior and exercise patience and meekness. When it is time for prayer, everyone goes to the prayer centre without waiting to be told. When the session is on, everyone is to be at the conference centre and listen carefully to the proceedings.

Social Benefits
Every year, hundreds – sometimes thousands – new members join the Ahmadiyya Muslim Community. The Jalsa Salana gives them the opportunity to meet other Ahmadi Muslims and build fraternal relations with them. The motto of the Ahmadiyya Muslim Community being ‘Love for All Hatred for None, this promotes a cordial relation between its members.
The belief that empathy follows knowledge is true. If members of the Community know each other, it will enhance their having empathy for each other which will certainly yield a lot of social benefits for them and the community at large.

Spiritual Benefits
At the Jalsa Salana, the foremost consideration is given to spiritual and moral training. Thus, scholars will discuss the spiritual and moral insights in light of the teachings of the Holy Quran and the teachings of the Holy Prophet Muhammad. This will enhance their knowledge of Allah and His Messenger thus enabling them to live a life which is within the precepts of Islam.
The five daily prayers are observed in congregation by all attendees of Jalsa and Dars, lessons, are offered after the prayers. At dawn, everyone wakes up to say the Tahajjud prayers, voluntary prayer designed to make man closer to his Maker. This promotes spirituality and one gets closer to Allah, the Sublime.

Promotes Peace
At the Jalsa Salana, participants are urged to greet everyone they meet whether one is known or not. The greeting, Assalaamu Alaikum Wrahmatullah Wabarakaatuhu is in itself a prayer for peace., the repeated saying of this word dawns on the heart of man that peace is what is essential for both self and collective development in every aspect. This in this way, the Jalsa Salana promotes peace and love among men.
At the Jalsa Salana also, extensive prayers are offered for the country. These prayers are done earnestly that Allah may bless the nation with peace, progress and prosperity!
This year’s Jalsa Salana The Gambia is taking place today at 1700 hours at Masroor Senior Secondary School at Old Yundum. You are all cordially invited to grace the occasion.
May Allah bless The Gambia and her people. Amiin!

By Samsudeen Sarr I finally received the long-awaited letter from the office of the president, Statehouse Banjul, approving my application to meet the Gambian President,...
Read more
View Point

Almami Taal’s confirmation to The Standard, UDP lawyers have filed for a mandamus order against IEC was unconstitutional

Decency and ethics in politics and public life

By Madi Jobarteh In the wake of the Lamin Bojang saga it is necessary that Gambians pay attention to fundamental issues if we are going...
Read more
- Advertisment -