Journalists tasked to be upright, as GPU validates code of conduct 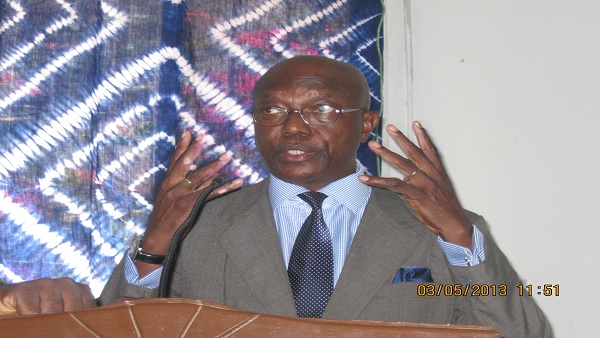 Veteran journalist and dean of the School of Journalism and Digital Media at the UTG, Nana Grey-Johnson has cautioned practicing journalists to be truthful in conducting their duties.

Mr. Grey-Johnson was speaking at the opening ceremony of a two-day meeting to review and validate the Gambia Press Union code of conduct for journalists at the NaNA Conference hall.

He criticized the former dictatorial regime of Jammeh for oppressing freedom of speech and expressions.

He added: “We have issues and we are corrupt, yet we expect the code of conduct to hold us safe, we can only monitor and create a buffer between the practicing journalist and the law.”

Mr. Johnson noted that if Jesus and Muhammad find it difficult to keep us straight, a code of conduct would do little to achieve that.

“It would not happen if we don’t want to become saints, be it Muslim, Christian or journalists,” he stressed.

He highlighted the advantages of the validation exercise, saying it would uplift the democratic profile of the state which means government leans upon the journalists for its own validity outside.

Mr Johnson urged journalist to do away with individual interest and consider the public interest at most.

By Momodou Darboe Former justice minister, Lamin Jobarteh has described as inaccurate reports that he was remanded on bail for allegedly receiving money by false...
Read more
- Advertisment -