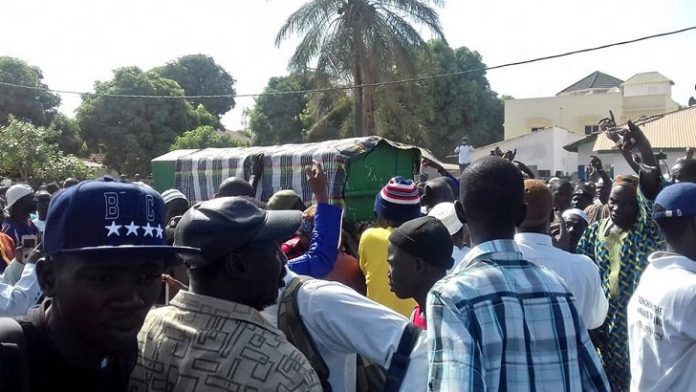 Thousands of mourners attended the funeral of famous radio journalist Sarjo Barrow, who died at his Brusubi house Sunday.
Among the mourners were minister of Information Ebrima Sillah and that of Tourism Hamat Bah.

Minister Ebrima Sillah called on journalists, especially the young ones in the country to emulate the late Alhajie Sarjo Barrow.
Sillah, who was speaking to The Standard at Sarjo’s funeral added: “Alhaji Sarjo Barrow was a library. He also worked very hard serving the country. He was an embodiment of unity in our country. He sacrificed everything for this country. We are all sad about this untimely death.”

Sillah added the late Sarjo was one of the people who inspired him when he, Sillah, began translating news into Mandinka at the now defunct Citizen FM.
Another journalist, Lamin Cham, editor of The Standard, said Sarjo Barrow was a complete broadcaster. “Radio is about good voice and brilliant delivery. Sarjo Barrow had both in abundance. He translated news in Mandinka so well that he succeeded in creating words in the Mandinka vocabulary that made his listeners understand issues better. Words such as tajirantungo, meaning terrorist in English, were created by Sarjo,” Lamin Cham said.

According to Mr Cham, Sarjo Barrow’s Mandinka current affairs programme Jamano was the most popular programme on Radio Gambia. Mr Cham said Sarjo Barrow’s voice and style were so much loved that even if he went to cover a presidential tour, he was often introduced among the distinguished guests and VIPs.

“I have never known a broadcaster with such an enduring legacy and effect on his audience. Like him or hate him, Sarjo Barrow was a legend,” Lamin Cham concluded.
Kebba Barrow, elder brother to the late Sarjo, said being the only one from the family to attend formal school, Sarjo has worked very hard to make the family proud.
He described his late brother as someone very contented with what he had and always shared his income with family members.
Sarjo Manjang, an Imam in Brusubi said the late Alhaji Sarjo Barrow was his friend and good neighbor.