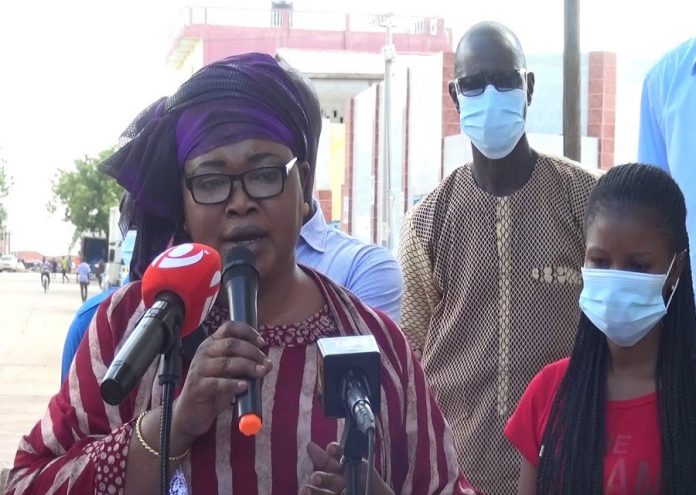 Mayor Rohey Malick Lowe has criticised the Central Government for not supporting Councils with funding to combat the pandemic at the local level.
The Mayor was speaking Thursday as she launched the “Operation 100,000 Facemasks Initiative ” for the people of Banjul.

The initiative is designed to attract all relevant stakeholders in Banjul and the Diaspora to contribute to the funding and promotion of the wearing of face masks which has been recognised as vital in slowing down the transmission of the virus along with physical distancing.

Launching the initiative, Mayor Lowe challenged the Central Government to pull all its efforts to creating a healthy environment for the inhabitants of Banjul because, as she puts it, the capital city has been neglected.

“People are dying on a daily basis not only from Covid-19 but from cancer, diabetes, hypertension and other related diseases as our hospitals are overwhelmed with patients and the situation continues to be very bleak,” she lamented. She added: “Those of you who may or are asking what has Government done for Council in its fight against the pandemic, I wish to make it quite clear that Government has not in any way contributed to our efforts at council level; meaning that we have not so far received any funds from Government to keep the citizens of Banjul safe”.

The Mayor appealed to Banjul diaspora to put aside all differences whether political or otherwise, and save the nation as the BCC intends to provide 100,000 face masks for needy Gambians. “If other countries have succeeded in the fight, leaving all their differences be it political, ethnic or otherwise aside, we too can do it,” she said.

She said the private sector in The Gambia has been over-stretched looking at what they have done over the period. “The Banjul City Council with its meager resources has done its quota and will continue to do so. Since March, we have contributed immensely in the fight against this deadly pandemic. I cannot sit down and watch this sad situation continue and it is my duty to come out and make this appeal to you who have your hearts in our dear country.

Your contribution to your families in the remittances you send will not go in vain and Allah will bless you for that. Every cent you give to society will be blessed for Allah knows best. As I launch “Operation 100,000 Masks”, I call on you my brothers and sisters in the Diaspora to join me and take up this challenge. I want to congratulate all the civil society organizations in Banjul, Banjul Red Cross and staff of Banjul City Council for all the hard-work they have been doing in the fight against the pandemic. Their efforts have not gone unnoticed and we salute them,” Mayor Lowe concluded.