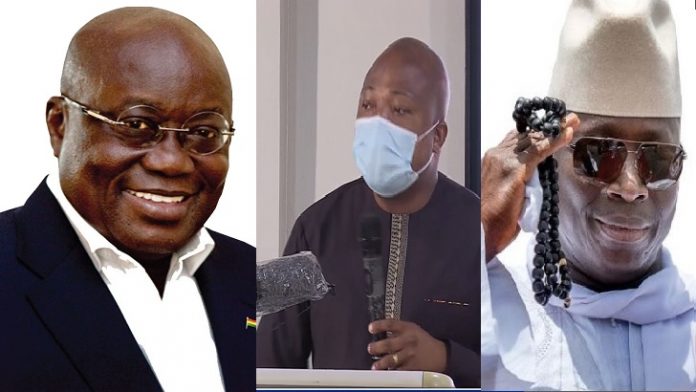 A Ghanaian parliamentarian has called on the Ghanaian government to put in a request to Equatorial Guinea to seek Yahya Jammeh’s extradition.
Samuel Okudzeto Ablakwa is a member of parliament for North Tongu Constituency and ranking member, foreign affairs committee of parliament in Ghana
“Ghana should put in a request to Equatorial Guinea which has become the safe haven for Yahya Jammeh – he must be extradited and he must be prosecuted in Ghana,” Ablakwa said at a meeting marking the 15th anniversary commemoration of the massacre and enforced disappearances of 44 Ghanaians in The Gambia in 2005.
The families of more than 50 Ghanaians and other West African migrants killed in The Gambia and Senegal 15 years ago are yet to learn the full truth and obtain justice concerning the massacre.

“Yahya Jammeh must be brought to justice. That is the only way we can end impunity and to let political leaders know that a day of reckoning will come – there will always be accountability,” the MP added, arguing that president Akufo Ado should make a commitment to bring Jammeh to justice.

He said as contrary to those who say bringing Jammeh to face justice in Ghana will create diplomatic challenges for the country, “it will rather project positively our human rights credentials and highlight the fact that we do not believe that political leaders who engage in impunity and take down innocent citizens should get away with it.”

“Jammeh’s crimes have been well documented – his own allies have confessed and he has had no convincing rebuttal or defence for that matter and in any case, we are not asking for any extrajudicial killings – we are saying he should have his day in court. If he has any defence or he is innocent a credible legal process will have him vindicated but he must have his day in court.

“We insist that we will not take silence for an answer. The UN itself must rise up and take keen interest in this matter because it did acknowledge that once fresh evidence emerges, it will return to this matter and fresh evidence has emerged at the TRRC,” he said.
Ecowas  Akoto Ampaw, a private legal practitioner who took part in the investigation of the killings of the migrants, said: “It is heartening that our parliament has recognised the seriousness of this matter and has decided to take it up. But it is the president of the republic who must act to ensure that justice is done – not only to our citizens but other Ecowas citizens.”

“I appeal to the president of Ghana to take up the matter at the highest level in Ecowas. We do know the political elites in Africa and West Africa for that matter are always afraid of their own shadows – so as they look at this Yahya Jammeh thing, they are thinking about themselves whether tomorrow they will not be caught up in a similar situation as Jammeh. Therefore, this reality gives greater significance to the civil society movement of J2J. Let us continue to push on and shall overcome,” he said.

The influential human rights lawyer and one of President Ado’s private lawyers said it is rather baffling that Ecowas states “do not have commitment to ensuring justice to their citizens.

“This I believe has to do with our political systems that we have and their relationship with their citizens because if the states themselves do not respect the lives of their citizens then when other states in the neighbourhood do something atrocious like what happened in The Gambia in 2005, there is going to be lip-service to ensuring justice,” he said.

The chairperson and lead campaigner – justice for 44Ghanian, Professor Kwame Karikari, said Ghanaians should propose and demand from their government that because “the majority of these people who were murdered came from Ghana, we would like this government to agree to a trial of Yahya Jammeh on our soil here – for many reasons that small Gambia may not be the right place and the government.”