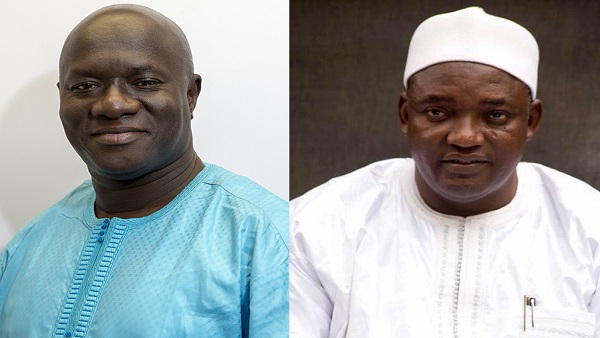 Conversely, whenever there is any instability in Gambia (now “The Gambia”), Senegal must also immediately send Military Personnel/Soldiers to Gambia to assist.

“A friend in need, is a friend indeed”, as the famous adage goes.

By then, Gambia never had an Army, instead it had a Paramilitary Field Force, and my dear paternal Uncle, the late Mr. Emmanuel Eku Mahoney, was its able Deputy Commander.

In 1980, he was shot and killed in the Bakau Barracks, by the ill- intentioned and malicious Mr. Mustapha Danso, a Constable in The Field Force. His assassination, inevitably led to the 1981 bloody attempted Coup d’tat, led by the late Mr. Kukoi Samba Sanyang, by the end of July 1981, when His Excellency President Sir Dawda Kairaba Jawara (K.C.M.G.).

(G.M.R.G.), The First President Of The Republic Of The Gambia and The Commander-In-Chief Of The Armed Forces, was away in The United Kingdom, as an Official Guest of The British Royal Family, headed by Her Majesty Queen Elizabeth The 2nd, for the grand and historical occasion of, The Royal Wedding between Prince Charles (The Prince Of Wales) and the late Princess Dianna Frances Spencer, on 29th July 1981, rightly dubbed:-“The Wedding Of The Century.

” Prince Charles is The Heir Presumptive/Apparent to The British Throne , and from Wednesday 31st October 2018, Prince Charles and Madam Carmella, Duchess Of Cornwall, arrived in The Gambia, to begin a 3-day Royal Visit, (the first leg of their African Tour, and they later visited Ghana and then Nigeria, all are Commonwealth Countries).

They were warmly received on arrival, at The Banjul international Airport, by His Excellency President Adama Barrow, who offered them , The Gambia’s warm and friendly hospitality .It was on the legal basis, of the aforesaid important Bilateral Security Agreement, between Gambia and Senegal, that His Excellency President Sir Dawda Kairaba Jawara, urgently and Officially requested his then Senegalese Counterpart, His Excellency Mr. Abdou Joof, to quickly dispatch Senegalese Soldiers to The Gambia, by land, sea and air, to crush the attempted bloody coup plotters, and restore the full Democratic Presidency, of His Excellency Sir Dawda Kairaba Jawara (K.C.M.G.). (G.M.R.G.), The late Mr. Mustapha Danso, was rightly executed on 30th September 1981, for murdering the late Deputy Commander Mr. Emmanuel Eku Mahoney. “He who sheds another man’s blood, by man shall his blood be shed”-Genesis, Chapter 9, Verse 6, The Holy Bible.

This is otherwise known as The Mosaic Law:- “An eye for an eye, and a tooth, for a tooth.”

Sura/Chapter 6, Verse 151 in The Holy Quran also says:-“Do not kill the soul, which Allah has forbidden, except for the requirements of Justice.

He has enjoined you with that, so you may understand.”

The Chief Commander Of The Paramilitary Field Force, was British-born Mr. John Clews, ably assisted by Sir Hinds (K.C.M.G.) . My Learned Friend and Senior, Mr. Antouman A. B. Gaye, also reliably informed me, by that time, he was attending The Police Training School, then headed by Inspector Chongan, the father of Mr. Ebrima Chongan, an ex Assistant I.G.P. during The Gambia’s 1st Republic, the first witness to testify at the T.R.R.C., and he is now My Learned Junior.

By God’s Grace, I was present at the prototype session or the 1st Public Hearing of the T.R.R.C., on 7th January 2019, ably conducted by My Learned Friend, Mr. Essa M. Faal, The Lead Counsel. The able T.R.R.C. Chairman and Deputy Chairperson are:- DR. Lamin J. Sise (L.L.B. Honours, Cambridge University etc), and Mrs. Adelaide Carayol –Sosseh), respectively. From 1994 to around 1997, I was a Senior State Counsel at The Attorney General’s Chambers & Ministry Of Justice, a Founder Senior Law Lecturer at The G.T.T.I.

and a Senior Criminal Law Lecturer, at The Police Training School, in Yundum, in the West Coast Region (W.C.R.), whose present able Regional Governor, is Mr. Bakary Sanyang, my good friend, and Senior Civil Service Colleague.

I have gone down Law memory lane, in order to unearth this important Gambian Treason Case, to prove beyond all reasonable doubt, that His Excellency President Adama Barrow, while he was speaking about National Security In The Gambia, in the said interview, was quite right to refer, to the National Security of neighbouring Senegal, especially his reference to his Senegalese Counterpart, His Excellency Mr. Macky Sall, The Commander-In-Chief of The Senegalese Armed Forces. Such a correct reference, does not in any way mean, that he was
“playing second fiddle” (i.e. being inferior) to The Senegalese President, as Mr. Madi Jobarteh, was dishonestly and deceitfully insinuating.

His Excellency President Macky Sall, knows fully well, that both himself and his Gambian Counterpart, His Excellency Adama Barrow, are Democratically Elected Presidents, of 2 independent Sovereign neighbouring African States, and none of them, should “play second fiddle”, to the other. Irrespective of their size, at The United Nations General Assembly, in New York, U.S.A., both States have only one vote, just like the mighty Nigeria, Africa’s most populous Nation/State.

Should His Excellency Adama Barrow Mandatorily Visit Gambian Soldiers At The Barracks? The answer to this important Security question, is obviously “NO”.

Mr. Madi Jobarteh wrongly wrote:-“…what is even more unfortunate about that statement, is when he sought to caricature voices and citizens, who demand that, he should have visited the barracks…” It is not legally mandatory for His Excellency President Adama Barrow, to visit Gambian Soldiers at the barracks, because neither the said Constitution, nor The Gambia Armed Force Act (1985), have any Clause or Section, which says so, His Excellency Adama Barrow, in the said interview, said that as The Commander-In-Chief Of The Armed Forces, on a daily basis, he consults with The C.D.S., and he has“…. other means to know what is happening inside the Barracks, and with Soldiers.

” His Excellency Adama Barrow, did not disclose, what he meant by “other means to know what is happening inside the Barracks, and with Soldiers”. He has no obligation to do so, because in The Law Of Evidence, sensitive information pertaining to National Security, are classified as:- “Privilege”, and they cannot be compulsorily disclosed, even in Judicial proceedings in a Court Of Law, if such a disclosure will certainly be, prejudicial to the public interest or pro bono publico (i.e. the good of the public).

The leading Law Of Evidence Case, for this sacrosanct and inviolable legal principle, is Conway Vs Rimer, ably decided in 1968 by The House Of Lords (the then British highest Court), now replaced by The U.K. Supreme Court, established on 1st December 2009.

This is an excellent Security modus operandi (Latin:- mode of operation). His Excellency President Adama Barrow, should indeed be highly commended for this, although Mr. Madi Jobarteh, has seriously, shamelessly and scathingly criticized this with venom, with very flimsy, theoretical and unacceptable academic reasons.

He believes he is the only person, to lead Uganda.” The 2 Ugandan Presidents were:- (1) H.E. Mr Milton Obote,a Medical Doctor and (2) H.E. Field Marshal Edi Amin alias “Dada.” This is res ipsa loquitor (Latin:- the thing speaks for itself).

Indeed President Museveni, (unlike His Excellency President Adama Barrow), has very good and compelling security reasons, for him to frequently visit his gallant Soldiers, at the Barracks, as their Commander-In-Chief. I briefly met His Excellency President Mr. Yoweri Museveni, and we had a laconic chat, on 31st May 2010, when he came to The Speke Resort Center, Munyonyo, Kampala, Uganda, to Officially Open The First Review Conference For State Parties To The Rome Statute, which established The International Criminal Court (I.C.C.), in The Hague in The Netherlands, and our good Gambian Sister and Learned Friend, Honourable DR. Mrs. Fatou Bomm Bensouda (O.R.G.), is its present able Chief Prosecutor. By the Grace Of God Almighty, I am :- “ A Fellow Of The Hague Academy Of International Law”.

This important and prototype (first of its kind), Public International Law Conference, lasted from 31st May to 11th June 2010. The other 2 Senior Gambian Delegates, who ably constituted part of the 3-Man high-powered Gambian Delegation to the said Conference, with “Full Powers”, from the then Honourable Minister Of Foreign Affairs, Mr. Ousman Jammeh (a Secretary General Emeritus) were:- (1) the then Honourable Attorney General & Minister Of Justice, My Learned Friend, Mr. Edward Anthony Gomez and (2) the then Gambian Ambassador Extraordinary and Plenipotentiary, to The Kingdom Of Belgium and The European Union (E.U.), His Excellency Mr. Mamour Jagne.

On Human Rights And Democracy:-Finally, Mr. Madi Jobarteh wrongly wrote:-“On human rights and Democracy, Barrow must be told that he has to be consistent and committed to these objectives.

As he acknowledged knowing about the arrest of “3 Years Jotna” people, one wonders why he did not speak against the Police for arresting 15 Gambians, even before they embarked on a peaceful demonstration?” The “3 Years Jotna” people, were rightly and timely arrested by the Police, for going out in the streets, for a so-called, “peaceful demonstration”, without first of all obtaining Official clearance for this in writing, from the able Inspector General Of Police (I.G.P.), Mr. Mamaur Jobe, who is one of my excellent former L.L.B. Students, of The Faculty Of Law Of The University Of The Gambia (U.T.G.). The said act of the said culprits, was clearly a flagrant violation of The Public Order Act ( Cap.22:01).

His Excellency President Adama Barrow, rightly did not castigate the Police, for arresting 15 Gambians before they embarked on a so-called peaceful demonstration, because (1) he rightly did not want to preempt or unduly interfere with the sensitive and important Official work of The Police, and (2) The Police were quite right in duly arresting 15 Gambians, “even before they embarked on a peaceful demonstration”, because “prevention is better than cure”, as the age-old and time-honoured adage goes.

The bogus reason, why the aforesaid culprits went on an illegal demonstration, was that they foolishly wanted His Excellency President Adama Barrow, to step down from The Presidency, after 3 years.

Conclusion:-In Conclusion, I must say, that His Excellency President Adama Barrow, indeed did very well in the recent interview, which he had with Mr. Harona Drammeh, a veteran and famous Gambian Journalist. I can confidently say so, as a Senior U.T.G. Law Lecturer and Examiner, from 2007 to date, by God’s Grace.

As patriotic Gambians, we should always applaud His Excellency President Adama Barrow, whenever in the opinion of the right-thinking Gambians, and friends of The Gambia,he is doing a good or excellent job for our beloved Motherland (The Commonwealth Republic Of The Gambia)

. His Excellency President Adama Barrow,is now the able Statutory Chancellor, Of The U.T.G., according to The U.T.G. Act (1999).

The likes of Mr. Madi Jobarteh, are now making it an unpalatable and unwarranted hobby, to be always criticizing His Excellency President Adama Barrow, for criticism sake, and for cheap popularity, from simple-minded or gullible Gambians, both in-Country and in the diaspora.

This is unpatriotic, and totally unacceptable, in our beloved “New Gambia.”“In the Kingdom of the blind, the one-eyed man is King”, as the famous adage goes. : -” For The Gambia our homeland, we strive and work and pray that all may live in unity, freedom and peace each day…” I rest my Case.

I invite reference to an eye-catching frontpage article published by my learned junior Barrister Lamin J Darbo, in the Monday 18TH May 2020, publication...
Read more
- Advertisment -