My perspective on thepublic finance chapter of the Draft Final Constitution 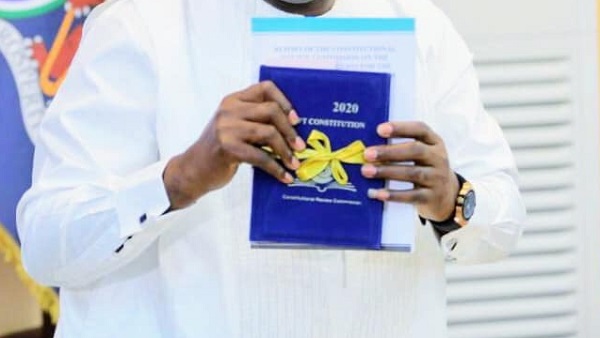 The Constitution is probably the most important national document in the governance of a country and therefore must be relevant and stand the test of time. In order to achieve that objective, the elaboration of this national document must be as widely consultative as possible. It is appreciable that the Constitutional Review Commission (CRC) consulted as widely as possible and tried as much as possible to accommodate the varied and divergent views as much as possible.

One major component of a country’s governance architecture has to do with public finance, i.e., the way and manner the financial resources of the country are mobilised and managed for the betterment of the citizenry. This is contained in Chapter IX of the 1997 Constitution and in Chapter XIII of the Draft Final Constitution recently submitted by the CRC.
Having gone through both documents, apart from differences in presentation and arrangements of sections, the Draft Final Constitution presents three major and welcome departures from the 1997 Constitution as far as public finance is concerned, and these are[:

1.The Chapter begins with what may be called a preamble outlining the Principles of Public Finance and providing guidelines for government and public officials and institutions in ensuring proper financial management (Art 238); but also imposes on Government the obligation to provide financial support to Local Government Authority

2. The Chapter also provides for the establishment of a Development Fund (Art 244) that serves as an equalisation fund to be used solely to provide basic services to marginalised groups and disadvantaged areas in order to bring them to a level generally enjoyed by other groups or areas of the country.

3. A new section on Public Procurement (Art 253) has been added to the Chapter, setting out the directive principles of fairness, equity, transparency, competitiveness and cost-effectiveness regarding the public procurement of goods, works and services, while leaving to the National Assembly the power to legislate accordingly.

In parallel with the above new additions to the Chapter on Public Finance, there are also several notable changes in some of the provisions of the 1997 Constitution relating to the budget process.

· The time limit for the introduction of the National Budget (Draft Estimates of Revenue and Expenditures) in the National Assembly (NA) has been extended from at least thirty days (Art 152 of the 1997 Constitution) to at least sixty days (Art 250 of Draft Final Constitution) before the end of the financial year, while removing the time limit of 14 days imposed on the NA to approve the budget in the 1997 Constitution. This change is significant as it allows more time for the NA to scrutinise and seek both expert advice and public opinion on the Draft Estimates before its deliberation and approval.

· In effect, the Draft Constitution imposes on the relevant NA Committee to seek representations from the public and to take into consideration any recommendations. While this provision is progressive, it presents the potential for prolonging the approval process in the event representations and recommendations from the public and accepted by the NA Committee, require major adjustment of the Estimates as presented by the Minister of Finance and Economic Affairs.

· Although provision has been made for the President to approve spending for up to 4 months and not exceeding one-third of previous year’s budget in the event the budget is not approved by the end of the financial year, there is no clarity as to what happens if after this period of 4 months there is still no NA approval. While such a scenario has not happened in the past, as far as I know, it is still a possibility and the lack of clarity leaves room for interpretation and/or potential conflict.

· Finally, while not treated under the Public Finance Chapter in the Draft Final Constitution as is the case with the 1997 Constitution, the question of the independence of the Central Bank remains questionable. The Central Bank, treated under Independent Institutions, has a Board of Directors with a Chairperson other than the Governor. This is contrary to what obtains in the 1997 Constitution and International practice where the Governor is also the Chairperson. In effect, the Governor in the discharge of monetary policy is not expected to take instructions or directions from any person or authority, and by subjecting him/her to the authority of a chairperson other than himself/herself, his/her authority and independence is usurped and compromised.

By Lawyer Ibrahim Jallow, Esq., The Gambian Bar Association (GBA) has, until recently, been regarded as the Association for all legal practitioners in The Gambia....
Read more
Commentary