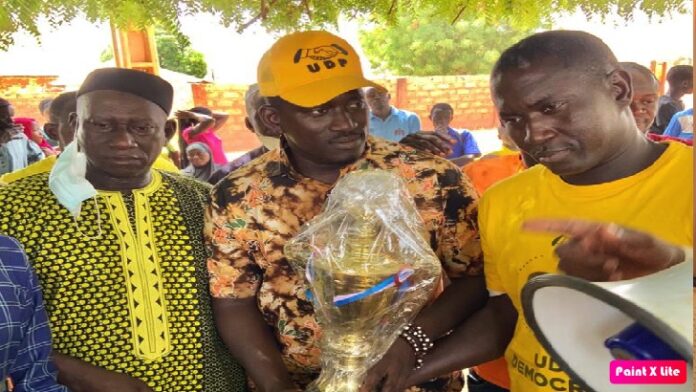 Former Presidential Affairs Minister and top UDP member, Momodou Sabally has provided a trophy and financial package for a tournament to be held in the Niani area of the Central River Region (CRR).

Sabally unveiled this initiative during a political event held at Niani Sukuta, on Sunday,

Presenting the giant trophy to youth leader Moro Dampha, witnessed by Niani Constituency NAM, Alhagie Sillah, Sabally said the need for young people to come together as one under sports will help them develop their potentials a lot more collectively.

He stated that the tournament is non-partisan and all youths of Niani are free to participate regardless of political affiliation.

The tournament will be named after ancient king of Niani Mansa Kimintang Camara, with a view to reviving the glorious past of the area and its legends.

In another side event, Sabally donated D40, 000 to the Islamic Institute of Barajally as token support towards the effective running of the school. He urged potential donors to come to the aid of the school which charges no tuition fees adding that the  the free for school plays a critical role in the development of the young people of that town.