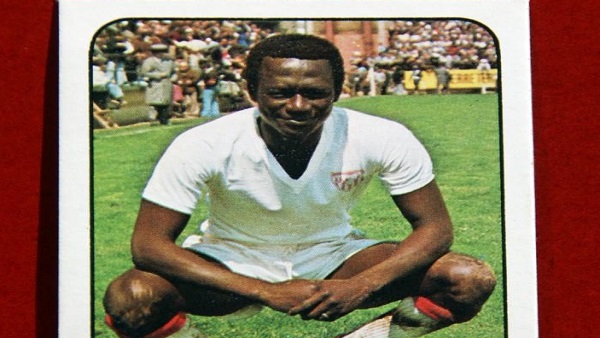 Spanish La Liga giants, Sevilla FC have paid tribute to the late Gambian football legend, Alhaji Momodou Biri Njie who will be laid to rest today. Gambians will bid farewell to the icon and soccer ambassador at a ceremony to be presided over by President Adama Barrow at the Banjul Arch this afternoon.

Meanwhile, an outpour of immense support and respect is still pouring from the football world as well as on social media as the news was announced of his death in the early hours of Sunday in Dakar where he was undergoing operation.

Alhaji Momodou Njle, alias Biri-Biri made 109 appearances for Sevilla FC between 1973 and 1978, registering 34 goals to his name out of which 14 were described as ‘crucial’ to Sevilla’s heroic promotion to the top tier of Spanish football in the 1974/75 season.
Biri-Biri joined the Andalusian club from Denmark in 1973 and spent 5 seasons at the club before leaving in 1978.

Biri, often hailed as the greatest Gambian player of all times, occasionally visited the club where he made a name for himself and left an indelible mark in the hearts of thousands of mesmerized Sevilla fans. He brought delight and wonder to all fans of all ages with his strong physique, agility and individual ability to improve team results. To Sevillians, he was both a legend and idol for the club, who will be greatly missed!

In 2017, Sevilla FC honored him with a prestigious gold insignia of the club and a section of their home stadium at the Ramon Sanchez Pizjuan known as Biris Norte which is usually occupied by the most loyalist of fans of the club was named after him.
In September 2019, according to what the club’s official site described as ‘his final visit to Sevilla’, Biri-Biri was quoted as saying in an interview, “people love me, and I love Sevilla”.