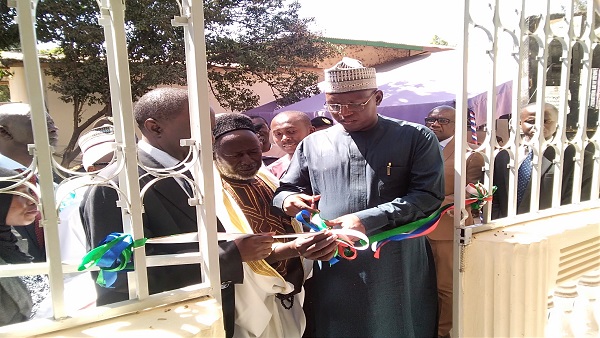 The Gambia State Intelligence Service (SIS), has yesterday inaugurated a new intelligence service office in Brikama, West Coast Region.
The building was sponsored and built by the staffers of the SIS within eight months to replace the old small regional office.

Speaking at the inauguration, the director general of the State Intelligence Service (SIS), Ousman Sowe, said the building will undoubtedly serve as a motivation for the staff of the institution and as well send a signal to them that to whom much is given much is expected.
He asserted that the new SIS has reformed from its old days to a service that represents the interest of the Gambian people, saying the building was built from scratch by staff of the SIS “and if anyone is wondering whether the SIS is reforming this building, this is a clear testimony of that reform.”

DG Sowe said the building fits in his institution’s national security belt.
“We are just from a nationwide tour to inspect structures and personnel all over the country as part of our security belt initiative that targets all the borders of the country. We attach lot of importance in the WCR and with your support we intend to build another office in Bwiam to ensure that security is assured for all Gambians and people of WCR in general.”

“All this is to ensure that we have a security sector that is robust enough to provide national security under a democratic dispensation where human security is put in the centre of national development,” he said.
DG Sowe hailed the mutual relationship the SIS is enjoying with the other sister security forces, saying there is no more competition among the security services.
The SIS boss, who recently ended a countrywide tour further asserts that Gambians have now taken ownership of the institution.

Meanwhile, the governor of West Coast Region, Bakary Sanyang said national security is the first priority of every government. He reminded the SIS boss that his region is faced with numerous security challenges owing to the fact that the region is sharing borders with Senegal.

He said the issues of environment are also national threats to the region, adding “Our other security challenges are land issues and political because all the political parties are fighting to have stronghold in the region and given the fact that former President Jammeh is from here, this has presented a big challenge.”