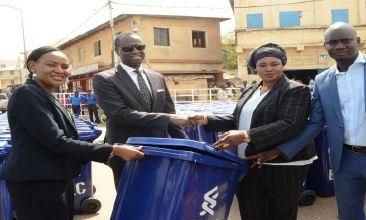 The bank intervened to give a facelift to the spot right in the city center which was in serious dilapidation.

Its new face now featured a beautiful landscape with a new protective fencing, all freshly painted.

According to a media release from the bank they will continue to participate in the up keeping of the Roundabout just as they are doing with the Banjul Arch Roundabout.

Meanwhile the Standard bank has also launched the start of a cleaning exercise covering the entire Independence Drive for the next six months.

For this exercise, the bank donated brooms, rakes, dust pans, gloves and 108 rubbish bins that will be stationed along the road as well as deploying 20 cleaners who will paid salaries by the bank during this period. The cleaners and have already been provided with uniforms and high visibility jackets for safety reasons as they clean the place each morning and evening.

The bank is closely working with the Banjul City Council and the Lord Mayoress of Banjul on both projects.

The bank’s CEO Olukorede Adenowo stated that as part of efforts to enhance their community engagement, corporate social responsibility and as a responsible business headquartered in Banjul, they are pleased to be able to do this for the community of Banjul and will always remain committed to these values.