It's a big year for Sukuta Wannsee Basic Cycle School as crowd of hundreds of friends and supporters joined the school to celebrate the 30th anniversary of its inception. 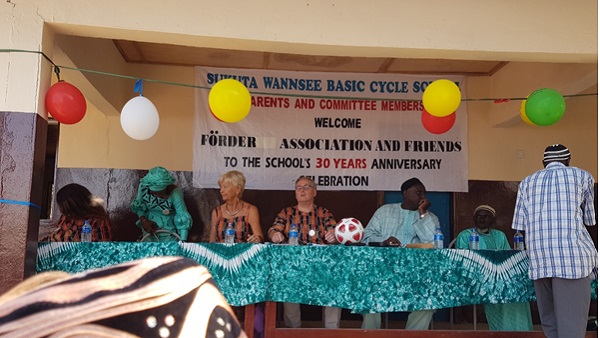 It’s a big year for Sukuta Wannsee Basic Cycle School as crowd of hundreds of friends and supporters joined the school to celebrate the 30th anniversary of its inception.

Founders Forderverein Sukuta Wannsee Association, and the school’s principal Sambou Kanteh said Wannsee has come a long way since its founding in 1989, saying a lot of development has been registered.

The school had only D8000 in its account when it was first formed, with 25 students and two teachers in a tiny environment, however, today it enrolled 620 pupils with a budget of D3 million, according to Alfred Harnischfeger, a board member of Forderverein Sukuta Wannsee Association.

He flew in from Germany and 36 other board members to join in the celebrations, signifying the importance of the day.

“The aim and objective of the founders is to provide quality and affordable basic education for children of Sukuta and its surroundings,” Sambou said in his welcoming remarks.

He praised his pupils for their outstanding performances in national exams. He said they registered “100 percent passes” in the 2017 Gambia Basic Education Certificate Examination, (Gabece).

“These results have demonstrated that the aim and objectives of the founders have been achieved. These great achievements were possible due to the effort of my hardworking and caring staff of the school” he said.

He said the founders have furnished the school with a modern computer lab, solar system, home science lab, a borehole and internet.

Alfred Harnischfeger explained how the school’s budget is to be used. “This budget is intended to supply the school with learning materials, keep the school in good condition and to take care of the well-being of teachers and students and organise teachers’ training and school excursions.”

Ousman Mohammed Cham, the chief guest of honour, spoke at length on the importance of education. He said it lights what he called “the flame of curiosity”.

He said: “…Education gives you the ability to question, reason and strive to solve the challenges of life. This is why the more you learn, the more questions you have. And it is education that helps you find answers to your questions.”

Waxing philosophical, the chief guest of honour went on: “My dear students, education helps each one of you to know that you have something to offer and to know that each one of you is good at something. You then have a responsibility to yourself to discover your strength backed by a willingness to learn and share with others. Education helps you to handle responsibility by providing you with the necessary tools to think and form opinions for yourself and put across your point of view.”