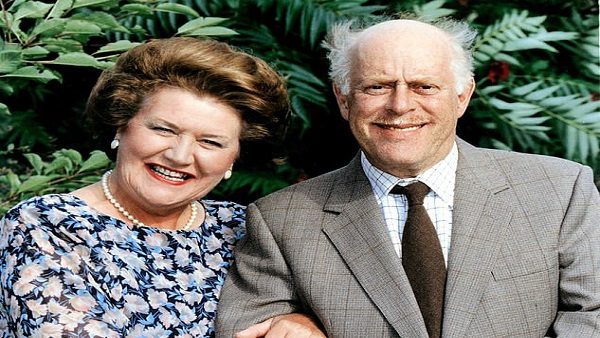 The show, written by Roy Clarke, was a huge hit and told the story of eccentric and snobby middle class social climber, Hyacinth Bucket (Patricia Routledge).
The show follows Hyacinth in her attempts to rise through the social classes, always exasperated by her family, who she considers to be of a lower social standing.
Rover driving Richard would regularly roll his eyes over Hyacinth’s irritations whenever her surname was pronounced Bucket instead of Bouquet as she preferred.
In 2014, he told The Express: ‘I was reluctant to accept the part of Richard until it hit me that Roy Clarke also wrote Last Of The Summer Wine.

‘Patricia and I got on very well; she’s from Birkenhead – not too far from my birthplace.
‘Like me she’s very musical and plays the piano and she was very loyal to me. That show is the only proper money I’ve earned, because it was a global success and it’s given me a good pension that I might never have had.’
As well as Keeping Up With Appearances, Clive also starred in Midsomer Murders, as well as a BBC adaptation of The Barchester Chronicles.

In December 2007, he appeared in the most watched ever Doctor Who Christmas special as Mr Copper, alongside Kylie Minogue, with around 13million viewers.
One stand out moment for Clive was an interview with Doctor Who Magazine in 2007, which drew much attention due to his grumpy demeanour while discussing his character in Voyage of the Damned.

Fans of the show were left tickled by the actor, who roasted the journalist by asking: ‘Don’t you know shorthand? Why should I do this? I’m not getting paid, am I?’
When asked about his character, the star countered: ‘You don’t need me to tell you that. Have you read the script? That’s what I perform. You can tell them about my character. What a silly question.’

‘One of the saddest things about the passing of the charming old character actor Clive Swift is that, in his absence, there’ll be no obvious candidate to play the vicar at his funeral.’
father to daughter Rebecca, who sadly passed away in April 2017 from cancer.
She was said to have inherited her passion for theatre and music from her father.
His son Joe, 53, is best known for appearing on Gardeners’ World and other botanical series. His other son Adam is a political philosopher and sociologist.

Clive’s brother David – who passed away aged 86 in 2016 – was also an actor, and starred in the likes of Drop the Dead Donkey and War and Peace.
Meanwhile, tributes to Clive started to appear on social media on Friday, when the news was released.
Fans wrote: ‘RIP Clive Swift. And I’ve only just learned that he was, for a while, married to Margaret Drabble…

Share
Facebook
Twitter
Pinterest
WhatsApp
Previous articleAddress by His Excellency Adama Barrow, President of the Republic of The Gambia and the Chancellor,at the 11th convocation ceremony of the University of The Gambia
Next articleFirst Lady launches child protection and nutrition project
Join The Conversation