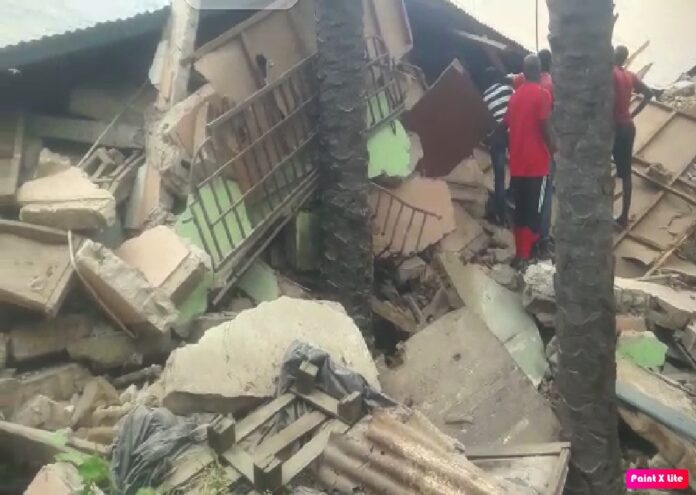 The vice president and members of the National Disaster Management Agency on Sunday visited a collapsed building in Banjul.

A woman and her daughter were reportedly wounded after a storey building collapsed on Willington Street on Saturday night.

VP Touray expressed sympathy to the family, saying it could have been catastrophic. “I am very glad that their lives have been saved. On behalf of His Excellence President Adama Barrow, I wish to extend government’s regards to the family that is affected by this and the entire Banjul,” she added.

She explained that the government is very much concerned about houses collapsing due to heavy rains. “Whether we are here or not our hearts are everywhere and the NDMA is going around the country to assess the situations.”

She urged relevant institutions assess buildings in order to establish if they are habitable.

She said this is a big lesson for government and compound owners to start building new houses. “We know that it requires resources but the government will do whatever it can to move this process forward as a matter of policy.”

Lamin Jobarteh, the compound owner thanked the vice president for her visit and his neighbors for their solidarity. He said he was at the office when the building collapsed. “When I arrived, I met that my wife and daughter were already taken to the hospital,” he said.

The NDMA executive director, Sanna Dahaba stated that the agency will work with stakeholders to assess some of the buildings for a response mechanism.

“We will work with the stakeholders like the Physical Planning and BCC itself and other relevant institutions.

The buildings that are not fit for human habitation will be immediately demolished. We have to conduct a comprehensive assessment of their suitability for human inhabitation.

Amadou Jallow, the civic disaster coordinator in Banjul, revealed that there are about 16 houses that are already about to collapse. He explained: “Actually there is another one just right there which is almost collapsing and I have to demand for its immediate demolition. There are a lot of houses within that neighborhood that are about to collapse and need to be demolished before further catastrophe. We don’t need to wait until disasters happen and start to act.”

In a separate development, the Jaiteh Kunda family on Tobacco Road lost their house to fire on Saturday night. The executive director of NDMA and civic disaster coordinator in Banjul visited the family to show solidarity.