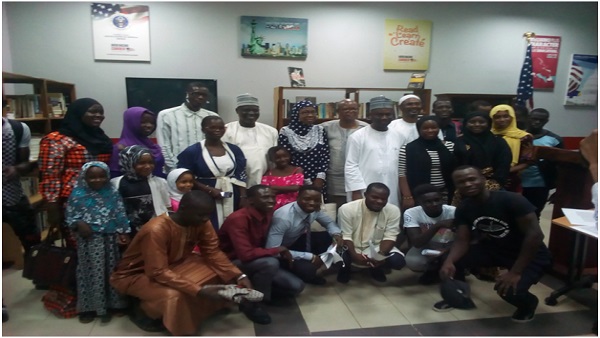 The Writers’ Association of The Gambia (WAG), recently organised a book and photo exhibition in honour of the late Gambian leader and founding father Sir Dawda Kairaba Jawara.

The event was also meant to commemorate World Book and Copyright Week 2019 which also coincided with the tenth anniversary of the Association.

Speaking at the event held at the American Corner, son of late Sir Dawda, Dawda Jawara Jr, said the passing of his father has brought the whole country together.

He said the outpour of love and appreciation that has come from Gambians across political, religious, ethnic, and age divides has indeed been remarkable.

“I am very proud that Sir Dawda’s contribution to the formation of this great nation continues to be acknowledged.

However, in these times of 24-hour news coverage, intensive social media, the political discourse across the globe, and indeed the narratives surrounding most spheres of human endeavor, tend to be framed mainly around the actions and pronouncements of great personalities of the day.”

Speaking further on his father’s book Kairaba, he said there are many messages people can take from it, its many themes and lessons.

He said the strongest message of the book is that history is not made by great men and women alone; it is also shaped by those around them.

Dawda Jr who spoke in detail and with visible pride on the life and times of his father, added: “As a young boy, Sir Dawda came to Banjul from Barajally to attend school.

He was put into the care of Mr Ebrima (Pa Yoma) Jallow in the Half Die quarter of Banjul. It is in fact quite possible that these early positive experiences in Banjul caused this young man from rural Niani to begin to see the The Gambia as a unified entity.

Sir Dawda’s path to schooling in Banjul, and to subsequent further education at Achimota in Ghana and later in Britain, was not an easy one.”

Hassoum Cessay, director general of the National Centre for Arts and Culture, NCAC, said Sir Dawda made history by becoming the first Gambian statesman to write and publish an autobiography. He said the book Kairaba is one way to preserving The Gambia’s history.

“Studying Gambian history of any epoch can be a hard task for the uninitiated historian.

This makes us to rely heavily on what Europeans have written about our country, with all the biases, prejudices, ignorance and sometimes, arrogance of the foreign scholar writing from the outside.”

He said Sir Dawda was heavily and extensively mediatised during his thirty two years as leader of this country.

“It must be said that the ability of Sir Dawda to set up a party with nothing except a few inexperienced provincials, no resources except the pecuniary goodwill of Sanjally Bojang and his own meager savings, and win national elections within three years is an unmatched success in West African politics.”

Meanwhile, WAG has elected a new executive it said is largely composed of youths who have amply demonstrated energy and enthusiasm to serve the Association and support fellow Gambians in schools to improve their English both in writing and reading.