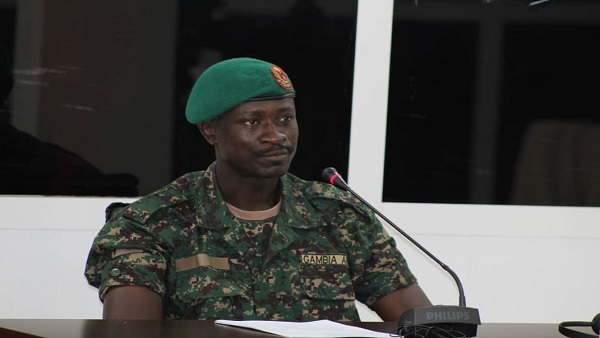 After several contradictions over his involvement in the alleged human rights violations of the patrol team, former Jungler Alieu Jeng finally put his acts together and revealed his role in multiple killings as confessed by his colleagues at the TRRC.

In his initial testimony, Jeng, 40, a native of Banjul initially reluctantly denied taking part in the killing of Dawda Nyassi, Ndongo Mboob, and Deyda Hydara. But after the break he apologized for misleading the commission and promised to come clean.

However though he accepted being part of the people who arrested Dawda Nyassi, Jeng said his role stopped at only watching over the car while Tumbul Tamba and others took him away in the bush.

He said he did not know Ndongo Mbood but accepted witnessing Hydara’s killing. Jeng also accepted taking part in the killings of a group of people he said he could not tell whether they were Ghanaians, adding that his role was passing the captured men to Malick Jatta and Sanna Manjang after which he heard gunshots.

Jeng also confirmed his participation in the killing of soldiers Alpha Bah, Malafi Corr, Alieu Ceesay and Ebou Lowe and the former NIA Director Daba Marenah and Misireh Jammeh.
Jeng, who joined the army in 2001, however denied any knowledge in the murder of Haruna Jammeh, a brother of the former president.

That statement ran contrary to that of fellow Jungler Omar A Jallow, alias Oya, who told the commission that he and Jeng were ordered by Sanna Manjang to put a rope around Haruna’s neck and pull it in different directions before he [Manjang] came down from a vehicle bonnet to stamp on the victim’s neck to finish him off.

Jeng is expected to continue his testimony when the commission resumes from Tobaski and Sang Marie breaks on August 19.