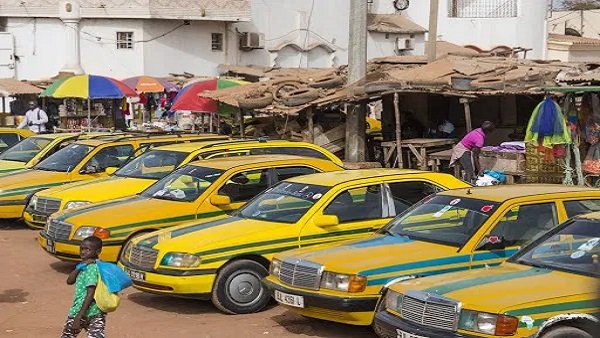 There were angry outbursts in Sukuta central car park yesterday morning as protesting drivers set barricades on the road to prevent vehicular traffic.
There were also pockets of disturbances at Tipper Garage, Bakoteh, as protesting unionists descended on non-protesting drivers, forcefully ejecting them from their taxis, smashing vehicle windows and physically attacking them.
As a result, a contingent of paramilitary officers was deployed to Tipper Garage to quell the disturbances.

Further afield at Westfield, protesting drivers made several attempts to prevent other drivers from boarding passengers. Police were deployed there to keep the peace.
Deputy governor of West Coast Region, Musa Susso, himself a native of Sukuta, advised the protesting drivers in Sukuta to challenge their complaints through the proper right channels instead of taking the law into their hands.

“My office will always be open to anyone particularly you the angry drivers. I can help you channel your complaints through the right way instead of you embarking on unlawful actions that can land you in trouble with the law. I am asking you to disperse and allow the other drivers to exercise their constitutional rights,” he pleaded.

A protesting driver, Yankuba Bajo, told reporters that he felt betrayed by drivers who refused to heed the transport union’s call for a strike. “This is bad. This is why this country cannot move. Anytime our union, which is in charge of our affairs, makes pronouncements these so-called drivers flout the rules. Are they better than anyone of us who are sitting down? We will not allow them [to operate].”
Musa Jatta, a driver who ignored the strike call, said he was not a member of the union calling for the strike and that he cannot follow the orders of an authority he does not recognise.

“I have my own vehicle and I am trying to make ends meet to be able to cater for my family. Sitting at home will be a disaster for me.Who is going to provide for my family? Look, they vandalised my vehicle. I will make sure they pay for it because it’s mine and does not belong to the so-called union.”