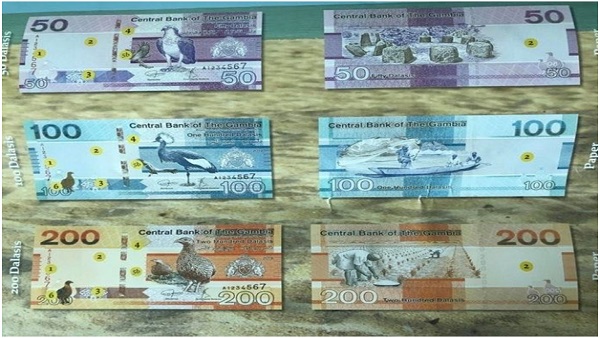 The Gambia yesterday released new banknotes into the economy through commercial banks.

The main feature of the new notes is the absence of the portrait of former dictator Yahya Jammeh. Jammeh’s image has been replaced by an imageof a bird.

Public opinion greatly pushed the country’s apex bank to come up with new notes, following clamouring calls for the former president’s face to be removed from the nation’s currency, Karamo Jawara, director of banking, said ealier this year.

Central Bank governor Bakary Jammeh said: “The currencies that [Jammeh] has his heads on were printed in 2015 and if you check currencies in circulation from 2014 to 2015, there are those that do not have his head.

“So we can print those 2014 ones on which he does not have his head and get delivery in February (2018),” he told journalists at the time.

“So [Jammeh’s] face is gradually phasing out because notes that come in here do not go out again. And the new stock we will print will take us the whole of 2018 without his head.

“Then we can have time to redesign the entire currency with new security features… We are thinking of standards such as the current bank notes of countries like South Africa and Ghana,” he added.

Many also called out Jammeh’s hypocrisy, after he criticised his predecessor Sir Dawda Jawara, for printing notes with his face on it.