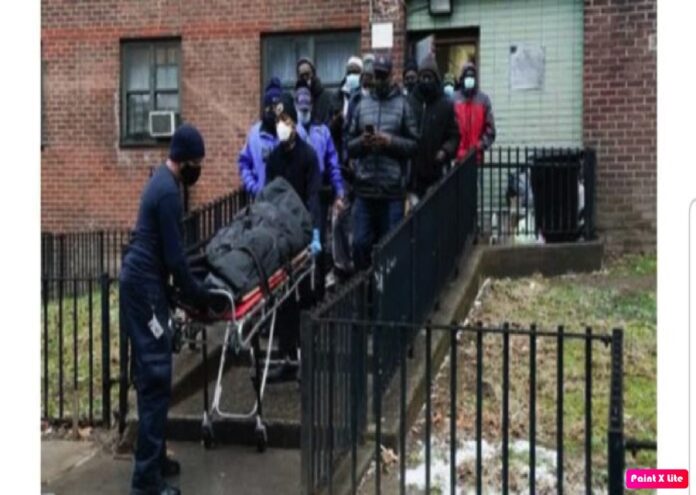 One Musa Camara, a Gambian, has fatally shot his mother on Tuesday at the family’s East Harlem apartment despite her having a protective order and a panic button inside the home, according to authorities and family members.

Fatoumata Danso, 39, was shot in the head by her son Musa Camara, 22, just after 9 p.m. inside the Lehman Houses on East 108th Street near Park Avenue, according to cops.

The grisly slaying comes less than six months after Camara allegedly threatened to kill her inside the same apartment, court records revealed.

Danson had a domestic violence panic alarm in the home, which she may have hit prior to being shot, cops said.

Danson had a domestic violence panic alarm in the home, which she may have hit prior to being shot, cops said.

Camara fled his mom’s home after the shooting and wound up a few blocks away on East 100th Street, where he fired several shots at a 29-year-old man, but missed. It’s not clear why he fired at the second victim.

Police finally stopped Camara at 110th Street and Madison Avenue, cops said. He tried to pull his gun on them, but officers tackled him before he could fire.

Once he was taken to the police station, Camara began acting bizarrely, removing all his clothing inside the cells, cops said.

He was not immediately charged and was taken to Metropolitan Hospital for a psychiatric evaluation.

Camara was busted in August 2020 on one count each of criminal mischief, attempted assault and harassment after his mom called the cops on him.

In a fit of rage, he allegedly grabbed her landline phone and smashed it into pieces then slammed his body against her, according to a criminal complaint. “I will kill you,” he allegedly seethed. A judge issued an order of protection barring Camara from having any contact with Danson. The charges were dropped at a hearing Tuesday because Danson had stopped cooperating with authorities, a spokesperson for the Manhattan District Attorney’s Office told the Post.

Family members gathered at the building where she was killed to grieve.

Yankuba Sangarie, one of the victim’s brothers, said his sister was from Gambia and came to the U.S. in the 90s.

“She is an immigrant in this country, come and look for a better life and she got killed by her own son,” said Sangarie.

Hajie Sankareh, another of the victim’s brothers, said his sister told him sometime ago that she kicked her eldest son out of the home and got an order of protection against him.

“He is not supposed to be in the house,” Sankareh said. “We don’t know how he got inside. Maybe he knocked on the door, she opened it and something happened. They said he shot her in the head.”