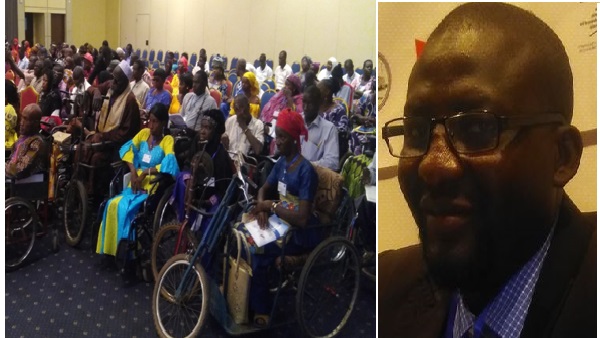 Muhammed Krubally, a magistrate and chairman of the Gambia Federation of the Disabled has accused the Gambia government of not paying attention to persons with disabilities.

Mr. Krubally was speaking at Kairaba Hotel during a national stakeholders’ meeting on the disability right bill and its importance.

It is funded by Article 19, EU, GFD and IHRDA and and was attended by dignitaries drawn from the office of the president, ministries, international human rights organizations, Civil Society Organizations (CSOs), national assembly members .

If they ever care it would be very little,” Krubally, also a renowned lawyer stated.

He further revealed that low expectations always cause a barrier between the disabled and those who call themselves able.

“That is why we are here to make sure persons with disabilities are given equal opportunity as enshrined in the Gambia’s constitution,” he told the meeting.

According to him, since they drafted the disability right bill, there were lots of consultations with the various ministries but the process is being delayed for so long now.

Krubally further argued that government has not granted any subvention to the disability federation for well over ten years now, adding that the common problems of further unemployment and equal access to healthcare are affecting the disabled too.

He called on the government to work together with stakeholders in making sure the disability right bill is enacted without further delay.

The European Union Ambassador to the Gambia, Attila Lajos reported with delight that the EU has pumped some £400,000 to The Gambia in support of capacity building for the disabled and human rights victims.

He said the longer this kind of view takes, the more persons living with disability suffer.
The EU Ambassador added his voice to calls for government to quickly table the disability bill before the national assembly in order for it to be enacted.

According to him respecting and granting the right of the disabled is not only a moral imperative but also a human right.