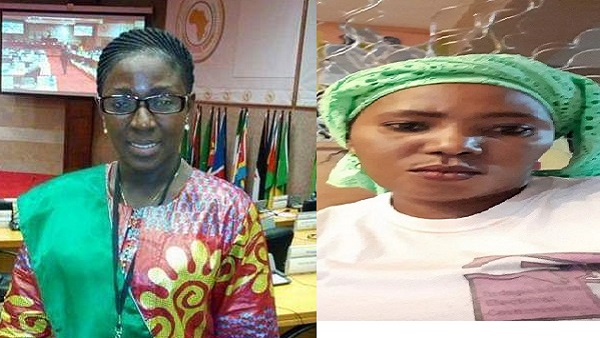 The national assembly member for Tallinding , Fatou k Jawara of the UDP has reacted to recent criticism from the opposition APRC officials.
Hon Jawara said he was dismayed to hear Kaddy Camara, the APRC NAM for Bondali making serious derogatory remarks against the UDP and the government of President Adama Barrow.

In a write-up shared with The Standard, Jawara said the remarks made by the member for Foni Bondali are a gross aberration and unbecoming of a national assembly member. He said Hon Camara should know that the Gambian people have decided and that Jammeh will never come back to power.
“I could have ignored her because I had a lot of regard for her but you cannot insult the whole UDP and the entire government and expect to go scot free. She kept talking about the unfortunate death of Haruna Jatta claiming that Jatta was killed by the government and asking the government to establish a TRRC for the deceased, even after a government investigative panel confirmed that he was shot by Ecomig forces following an avoidable protest in Kanilai.

If she is a genuine member of national assembly and is concerned about human rights, why is she always talking about Haruna Jatta’s death? What about the gross human rights violations by the government of ex-President Jammeh during which killings and disappearances were common place? This was a government that she served and had the opportunity to speak against the brutality of Jammeh and his henchmen but she chose to say only things at the whims of the tyrant and sadist,” Jawara said. Hon Jawara asked his APRC colleague about the scores of political supporters of the Coalition including one Siaka Fatajo, who disappeared during the impasse.

“What about Tumani Jallow, Masireh Jammeh and Haruna Jammeh, Jasaja Kujabi and Ndongo Mboob? Why didn’t Kaddy Camara defend those true martyrs of Foni if she claims to be genuine representative of her people in Foni?” he asked.
Jawara further reminded Hon Camara about the 2009 witch-hunt exercise instigated by Jammeh against communities across the country, “especially in the Foni region, who were forced to drink hallucinogenic concoctions that had serious health complications on them, with some publicly pilloried and others losing their lives? Why didn’t Kaddy Camara talk about that since she said she is defending the people of Foni?”
He continued: “If she talks about a level playing field, she is either a despicable human being or dishonest because the APRC government she served had denied every Gambian their basic rights and she should be grateful to those who did the fight to free the country so she herself can now enjoy the freedom of expression she is abusing by insulting President Barrow.

“Whether Foni supports or fails to support this government is irrelevant because they are less than 5% of the population and they only make numbers in their APRC rallies because they transport people from Casamance. Kaddy, you rejected this government and we have decided and Jammeh will never return unless only when we are receiving him from the airport and directly sending him to his very own ‘Five Star Hotel,’ of Bamba Dinka’ at the Mile 2. Isn’t it an irony that you singled out one tribe, the Manjagoes, and said you are like them and would never give up to the point you are calling on all those that speak the Jola language to remain loyal to the APRC; what a tribal bigot you are. The UDP is opened to all tribes and you can see that each and every tribe in the country has a representative in the central executive committee. The genuine APRC supporters have since joined government and supporting its development agenda. But people like you who are desperate job seeking people are deceiving the unsuspecting supporters of the party for your own selfish interest. ”