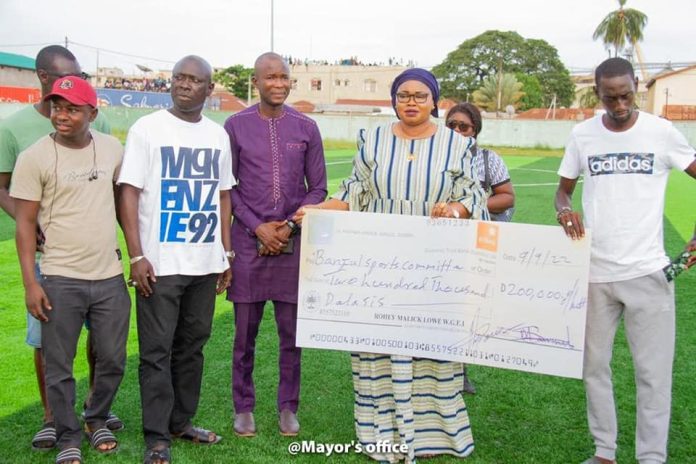 Mayor Rohey Malick Lowe of Banjul on Sunday presented a cheque of D200,000 to Banjul Sports Committee to support its expenses of the ongoing Banjul Nawettan.  The donation came from her Women and Girls Empowerment Initiative which is well known for its economic empowerment of women and youth through micro-finance and education.

Lowe, a sports enthusiast herself, handed the cheque to Committee president Momodou Musa Njie during a short presentation ceremony at the legendary KG5 mini stadium at Half-Die. The package will also include 60 balls meaning each participating teams in the tournament also received 2 balls.

The mayor used the opportunity to congratulate the new sports president on his election into office and said the donation is aimed at empowering youths of the city to realise their potential in sports.

She added that it has always been a great pleasure for her to support football since assuming office in 2018, adding that the BCC under her leadership will continue to support all youth empowerment initiatives including football in order to bring positive change in the city.

The mayor advised the committee to remain synonymous with transparency and fair play to ensure they deliver their mandate towards empowering Banjul youths and women.

In response the president of the Banjul Sports Committee Mr Nje said: “We are very proud of this gesture. When we came to office our first worry was how to get a sponsor for the Nawettan league and thought about the Mayor Lowe and  straight away went to her  for introductions. There and then she promised that she will sponsor both the Super Cup and the Nawettan. We are so proud and excited that she has come to fulfil that   promise which is in turn a challenge for us to deliver,” Njie said.