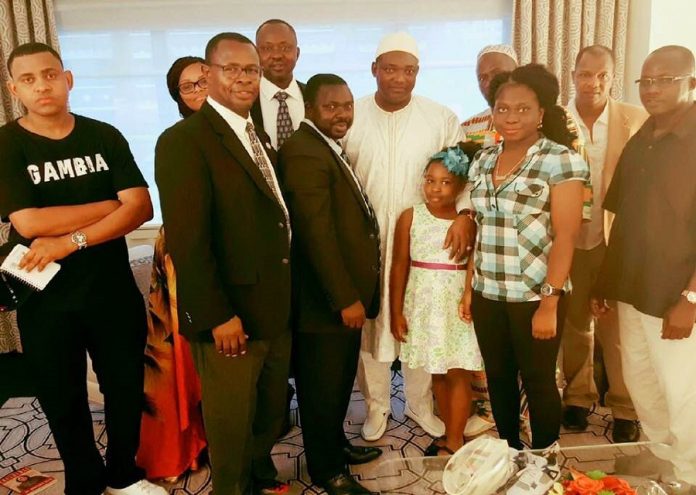 Almost two years ago this month, I became an unexpected guest of the Gambian President Adama Barrow during his first trip to the US as the new leader of the smallest country in mainland Africa.

I hadn’t planned on this trip. Two of my childhood friends residing in Michigan, and who were also executive members of the Gambian Association of Michigan, had already scheduled a meet-and-chat with the president and they wanted me to come along.

I was a bit hesitant. By nature and for professional reasons, I try to keep away from informal, social gatherings with politicians and the powers-that-be.

Hobnobbing with them is not my thing.

”No you have to join us,” my friends from Michigan told me, dithering between encouragent and persuasion.

It is always a privilege meeting with any president, they seemed to reason.

So off we went, meeting with Barrow in his Manhattan (New York City) hotel suite.

The encounter began on a pleasant note.

Barrow was folksy and jocular. He showered me with unadulterated attention.

”Wow, Cherno Baba,” he said in a demeanor I thought could only reside between astonishment and euphoria, the kind you feel when you chance upon a long-lost cousin.

Barrow was humble and hearty and conversational.

He and I chatted, going way back into the maudlin past.

We had crossed paths before.

We had exchanged pleasantries and teasers before.

We knew each other way back.

Time and distance had cannibalized whatever relations had existed between us.

But our Manhattan meeting seemed to thaw out our long-lost acquaintanceship.

I was both embarrassed and thrilled to meet with Barrow in 2017.

Embarrassed, because I sat there watching and talking to him knowing full well that even though I had supported him during the elections campaign against former President Yahya Jammeh, I had given him zero chances against his rival.

It was not even about his losing to Jammeh’s political skullduggery —- not at all.

I just thought that Jammeh was a better candidate in terms of poise, confidence, capacity, charisma, eloquence, just about anything viscerally convincing about a person’s state of preparedness for an expectant errand.

I was also thrilled to be in the company of Barrow — the history man. Going toe to toe against Jammeh, a dangerous, buccaneering fellow and defeating him, one of the last hold-outs of Africa’s big-man autocrats, has guaranteed Barrow a permanent etch in the sands of world history.

Defeating Jammeh in 2016 is an inflection point in the history of democracy in West Africa. It ranks up there in historical significance with the defeat in early 1991 of Mathieu Kerekou, the former military-turned-civilian leader of Benin, the first electorally-deposed incumbent in West Africa and perhaps the second in post-colonial mainland Africa after Somalia’s Adelle Abdullah Osman Daar in 1967.

Throughout my time with Barrow on that evening, I remained in awe of him, his place in history. But there was something about him that didn’t register well with me.

Over studied silence and in closely watching and listening to him make a point or two, I detected a certain kittenishness to him that didn’t inspire confidence in me that our new president had a clue about the enormity of the challenges of running the state, the boldness and the imagination required of leaders who take over states just coming out of long spells of authoritarianism and institutional paralysis.

Barrow is a man of history but he is no where ready for these far-reaching times.