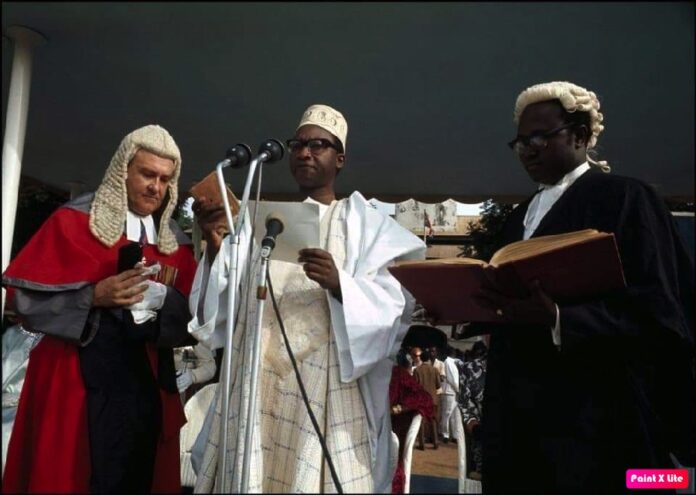 Sir Dawda Kairaba Jawara was the first President of the Republic of The Gambia. After independence, he led the country for many years but was criticised for lack of development in the areas of education, health and infrastructural development. He was also criticised for rampant corruption.

This piece seeks to highlight the priority areas he focused on like ensuring that tee State survived as there were fears that it will either seek to return to colonial rule or be annexed by its bigger and more powerful neighbor, Senegal. He led the country from February 1965 until July 1994 when he was overthrown by a group of young army officers led by the Leutenant Yahya AJJ Jammeh.

It is no secret that the Government of Sir Dawda Kairaba Jawara had many challenges and has been criticized from many fronts; and, for many failings or shortcomings. In fact, it is these shortcomings or perceived shortcomings that culminated in the coup d’état of July 1994 resulting in the assumption of Yahya Jammeh of the reins of power.

Jawara’s Government was accused of rampant corruption, nepotism and massive mismanagement of public funds. He was seen, in some quarters, as a weak leader as public officials were perceived to be doing whatever they wanted with impunity. Besides, the longevity of his rule gave credence to these allegations as he led the country for almost three decades.

Even the fiercest critics of Sir Dawda Kairaba Jawara concede that he was a man of peace. A man who respected the human being and made sure that people’s dignity were respected. On that front, he had a lot of achievements and The Gambia became the envy of the subregion in terms of Human Rights and the Rule of Law. This is evinced by the fact that the African Commission of Human and Peoples’ Rights, which bears the appellation The Banjul Charter, is headquartered here in Banjul.

Before the July ’94 putsch therefore, The Gambia enjoyed a high standing in the eyes of the International Community. Sir Dawda was highly respected in the world and The Gambia became a beacon of hope for human rights and the rule of law.

This piece here however wishes to look at what exactly was the area which DK Jawara prioritized during his reign. It is no secret that at Independence, there were many doubting Thomases on the viability of The Gambian state. An American journalist who was visiting the country, Berkeley Rice, called it “an improbable nation” destined to sink into economic and political mess soon after the British colonial rulers left.

The British were so skeptical, they agreed to provide a grant-in-aid scheme until 1967 to enable the government of The Gambia take care of its basic bills such as salaries for the civil service and so on. This perception was not only within the British colonial officers but some politicians and state actors had similar views.

Thus, it has been suggested that our neighbors nurtured ambitions of annexing The Gambia and making it a province of Senegal. In fact, until today there are those in The Gambia who still believe that Senegal is harboring those thoughts. After the 1981 botched coup d’état led by Kukoi Samba Sanyang which led to the Senegambia Confederation, those calls were again made in some quarters. It is said that some Senegalese political players thought it a good opportunity to fulfil their dreams.

It sowed the seeds of mistrust which ultimately led to the breaking up of the Confederation.

Going back to the time immediately after Independence, Jawara was astute enough to know that unless care was taken, the likelihood of Senegal annexing The Gambia were high. This could be gleaned from the strained relationship that the two countries began to manifest.

However, Sir Dawda Kairaba Jawara was quick to make countries like Guinea Conakry an ally which was seen to be a kind of a counterbalance in the subregion. As relations between The Gambia and Senegal became cold, her relationship with Guinea Conakry began getting warmer. This was a genius stroke to preserve Little Gambia.

Sir Dawda Kairaba Jawara also created and nurtured an excellent relationship with Ghana’s Nkurumah who was working tirelessly towards a United States of Africa. He visited Ghana frequently and consulted N’kurmah on occasions and made sure that their agendas aligned.

When some leaders wanted to isolate N’kurumah for fear that he was becoming too influential, and that if there ever was a United States of Africa he (N’kurumah) may lead it, Jawara stood by him and visited him in the middle of the time that he was being isolated. This was seen in Ghana and in many other areas as a boost to N’kurumah’s policies.

Another notable area in which Sir Dawda Kairaba Jawara did extremely well was his insistence on a multiparty democracy at a time when almost of the African countries were going one-party system. No matter the shortcomings of the model of democracy he and the PPP regime introduced, Jawara always maintained that there should be multiparty system and that the people should be given the opportunity to choose their leaders.

It can be seen therefore that Sir Dawda’s focus was more on ensuring that The Gambia stood and became as so many critics thought that it would not. They projected doom, gloom and a collapse within a short time where the country itself may seek to be amalgamated with Senegal.

Added to these problems was the fact that the British while here did not do anything to develop any part or any sector. It seems they were only interested in what they could extract from the country for the development of their people back home in Britain to the detriment of the indigenous people of the land.

This was why they stood firmly to neutralize Edward Francis Small who stood for the wellbeing of the people of The Gambia. He introduced trade unionism and taught the farmers how to solidify and give weight to the voices.

Sir Dawda Kairaba Jawara in his wisdom as well as tactfulness proved the doubters wrong and though in the area of infrastructural development the country is lagging behind, it has stood the test of time. More than fifty years on, that “improbable nation” is still standing and moving on.

It is necessary for us to teach our young people the true history of the struggle to independence so that we can forge ahead by identifying and eliminating the challenges and taking strides into the future!

- Advertisement -
Share
Facebook
Twitter
Pinterest
WhatsApp
Previous articleThe truth is buried in narratives, but so are lies
Next articleGAMBIA CONFIRMS MARCH 25 AS DATE WITH ANGOLA Congo lay in waiting on March 29. Scorpions most important assignments near
Join The Conversation