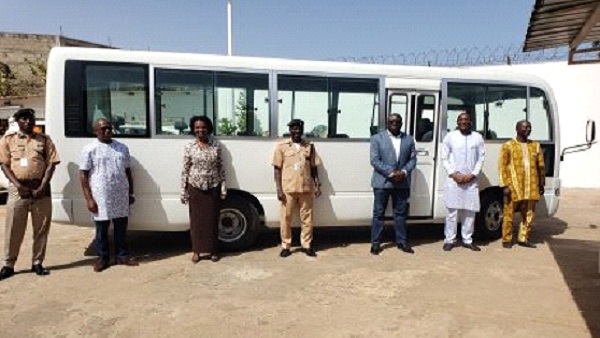 The UNDP Resident Representative, Ms Aissata De, said as soon as the pandemic has been declared the UNDP did not stop mobilising and supporting the efforts that The Gambia is taking, adding the gesture is part of the UNDP’s practical measures to improve the prison conditions.

She said the UNDP has been involved at looking closely the conditions of the detention centres. “Normally we were supposed to launch a documentary on Mile2 to raise awareness on the need to improve the conditions and this documentary was supposed to be launched in March but due to the virus, it was postponed,” she said.

She thanked the Gambia Chamber of Commerce and Industry for working together with the UNDP to look at the conditions in the prison so that the principle of leaving ‘no citizen behind’ is a reality especially in situations like this [COVID-19].

“It is in an emergency mode together with the GCCI, we are looking at several areas where we can have a quick impact intervention that can help to prevent any case in the location of the detention centres. That is why today we are handing over this minibus to workers to make sure that they have the minimum conditions to get to work in a safe manner.”
She noted that the UNDP intervention is in line with the overall UN support to The Gambia’s efforts to respond to this unprecedented pandemic.

He added that the GCCI through partnerships will provide fuel for six months including maintenance of the vehicle, urging the officials to practice social distancing to keep the prison safe.

He further revealed that the GCCI together with the UNDP is also working towards decongesting the prisons.
Ansuman Manneh, director general of Mile2 Prisons, thanked the donors for the gesture and intervention to improve the conditions of the prison. He added that it is not a secret that the prison is overcrowded and is the most vulnerable in terms of logistics and resources.

“Presently, we have all seen how our officers are being transported by trucks which definitely is not a motivating factor. Our inmates also when transporting to the hospital or court it is evident we have to approach some of our sister institutions like the fire services to at least transport our inmates to the hospital or the courts.”
He called on other private donors to get the Gambia prison services to the best international practices.