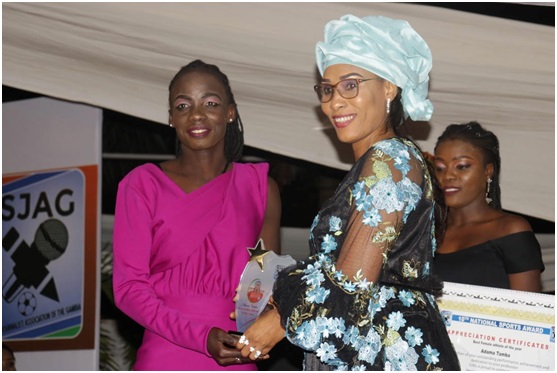 For ten years running, the Gambia National Sports Awards night, organized by the Sports Journalists’ Association of The Gambia (SJAG) has been ‘the sports actors’ party’.
Hundreds gathered at Coco Ocean to witness and celebrate the sports heroes and heroines for their incredible performance in 2018.

Prominent among the attendees were, the First Lady of The Gambia, Madam Fatou Bah-Barrow, Senegalese Sports Minister Matar Ba, The Gambia’s Attorney General and Minister of Justice Abubacarr Tambadou, sports journalists from the Senegalese Sports Press, and the Senegalese High Commissioner to The Gambia, Saliou Ndiaye.
It was the 10th edition of the sports awards, which is now the country’s most respected and credible National Sports Awards. Launched in 2007 by the Sports Journalists’ Association of The Gambia (SJAG), the initiative “National Sports Award” is meant to celebrate, honour and award legends and active sportsmen and women.

This event has over the past nine years witnessed the decoration of many men and women in sports, in a grand style. Among those awarded in the past include, but not limited to three-time “CAF Best Referee Award” winner Papa Gassama.
The event has not only motivated active sportsmen and women but continues to serve as a source of inspiration for aspiring young sportsmen and women, who are looking up to the awardees as sports role models. The milestone anniversary offers a chance to reflect on the event’s growth and impact.

Senegalese Sports Minister Matar Ba said such event will greatly impact on the development of sports in The Gambia. The Gambia and Senegal are neighbouring countries that share a lot in common.

Minister Ba, who had earlier met the Gambian President Adama Barrow, applauded the relationship between SJAG and their Senegalese counterpart, ANPS.
Ndey Mariam Njie, Permanent Secretary at the Ministry of Sports of The Gambia stated: “This initiative will positively contribute in the development of sports in The Gambia.”

Challenges
The journey has not been a smooth one but with the dynamic leadership of the current executive headed by President Musa Sise and those before them, the SJAG has remained steadfast. As difficult as it is, raising the required funds for such event has been a major challenge but the support and partnership from individuals and institutions continue to be a driving force.
SJAG President Musa Sise stated: “I want to thank you all for honouring our invitation to be with us to celebrate our sports men and women. I want to thank all the individuals and institutions that have supported us. As a professional body, we are committed to continue with the award to better motivate our athletes.”
Veteran sports journalist and honorary life president of SJAG, Pap Saine commended the First Lady of The Gambia for gracing the event. “I want to congratulate all the nominees for their outstanding performance in 2018. I want to salute the SJAG for organising the 10th edition.”