A man of his word 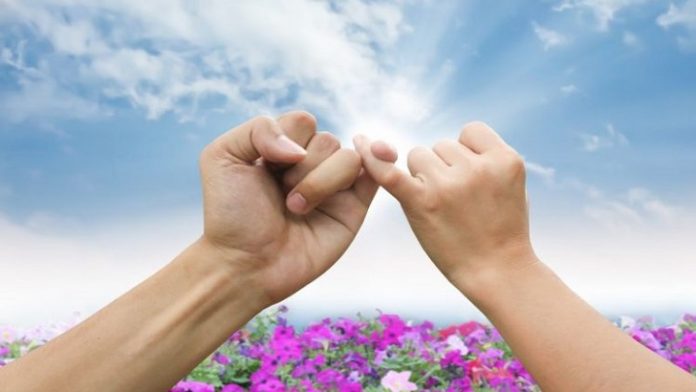 From Longman Dictionary of Contemporary English
A man of his word
A man you can trust, who will do what he has promised to do

• He was a man of his word, and I had great respect for his intellect.
A man of his words is one who can be expected to keep or follow through with his promises or intentions; a truthful, trustworthy or reliable person.

The following is a quote from a website called ”Relationship rules” and it speaks about a relation between a man and a woman.

”We should know better than to fall prey to sugar-coated words of a man and decide for ourselves if he is a man of his word or not.

If he really loves you and wants you to stay around, he will do the following things no matter what it takes, as long as they are dedicated to your well-being provided you also do what is expected of you.”

What if the man, mentioned in this quote, is a president and the ”we” and ”you” are the citizens in his country. T

ry to have that thought in your mind and then read the quote again. Do you see what I mean?
This quote is speaking about a man of his words, and if a man is like that it doesn’t matter what kind of relation he is in – he will not change.

So the sugar-coated words are all the promises given by the president candidate before he is elected, and also shortly after his inauguration.

We should decide for ourselves if he is a man of his word or not.

Is that an easy task? No, it’s not, especially if times are chaotic and you think to yourself that it can at least not become worse than before.

We can’t read a person’s mind, we don’t know his agenda.

We only know what we have heard or seen, we can only hope for the best.

To continue with the quote from ”If he loves you and wants you to stay around…….” is that what you have felt since the last election?
The youth that have continued leaving the Gambia by the back-way ; have they felt loved and appreciated? Have they felt that the president is keen to do everything in his power to make them stay in the mother-land? It could have been that way! It could easily have been that way, but not much has improved in the living conditions for anyone in the Gambia.

Quote:
”he will do the following things no matter what it takes, as long as they are dedicated to your well-being provided you also do what is expected of you.”

I still haven’t told you what ”the following” is about, but I will come back to that.

Dedicated to your well-being? Hospitals that doesn’t have enough equipment, classrooms with too many pupils, teachers with very low wages and many times too little education, roads that are in such bad conditions that it’s better to drive on the side of them.

Food prices are too high, poverty is still widely spread, women die when they give birth to babies because they are too far away from a health clinic – or can’t afford to go there – or the roads are too bad so she can’t go there – or it is too far to the clinic.

Dedicated to your well-being? It’s obvious even on a far distance that the president is not interested in anything else but being elected once more. The promise he gave, to stay for three years and then let the people decide, seems to be forgotten.

Why? What are his motives? Why is he not communicating with the people? Is it because of an inability to express his thoughts, or plain arrogance? I really would like to know, and I know I’m not alone in this.

From the very beginning of this mandate period we were promised transparency.

What does that mean to the president? Does he understand the meaning and the dignity of that word? Let’s go back to the dictionary and see what it says:
”Improving ethics is crucial to enhancing accountability and vice-versa.

It is a metaphorical extension of the meaning a “transparent” object is one that can be seen.”

Beautiful words, don’t you think; openness, communication, accountability? Why are leaders of African countries repeating the same mistakes as their precursors? Is the answer ignorance or arrogance? Perhaps a combination of both? Both reasons are just as bad and it’s saddening.

The sweet promises; were they meant to be held, or were they a result of the joyous occasion? It is easy to promise ”gold and green forests” as the saying goes here in Sweden.

You are so full of anticipation so you give a lot of promises, they fly out of your mouth like butterflies an early summer’s morning.

The joy, the relief, all the attention one gets easily goes to ones head and nums the common sense.

The common sense that tells you not to promise more than you intend to hold.

A man of his word; in that great moment when the world seems to embrace you it feels easy to give glorious promises.

The moment when the citizens are expecting the promises to be held is still far away.

The power of the position is slowly sinking in and deep there within lays the old insight that as a president you can say whatever you want and no one can question you.

The problem is that this was a fact in the old times, but times has changed.

For every educated person the new insights has sunk in a long time ago, new expectations come with new times.

Educated people who search for information and keep themselves updated have learned that we have the right to expect good things from our president.

A president of this time should be as the man in the quoted relationship advice from the beginning of this article.

He should care for the one he loves, the well-being of that person should always be in focuse.

This love should lead to wise decisions, to make every effort possible to make life easier for everyone in his small country.

This love for the Gambia shouldn’t only include the benefits of a position, the bank accounts, the houses, the families that are very well fed on others expence.

This love shouldn’t only be for those who pat his back and smile in his face, it should also include those who are criticizing him because they want the best for the country.

It is more important to listen to those who don’t give praise
as soon as they see or hear him. Of course there are people who criticize just because they love to complain about everything , but a man of this dignity should be able to sift the flow of words and leave the grumpy words behind.

Let’s move on to what ”the following” means in the relation rules I quoted:

12 great points to consider, can be interpreted differently depending on what kind of relation we speak about, but let us stay at the relation between a president and his country.

Point 1: promises. The most important promise in our case is the promise to stay for three years and then let the people decide. We have seen how little that promise is worth and how the efforts for being re-elected are more important than anything else.

Can we trust a man like that? Has he kept his promises? Has the living conditions in the Gambia become much better during his rule?
Point 2: committment.

Being committed in this case is to find out what the people need and meet those needs. People are still starving, dying of sicknesses that could be easily cured, struggling daily to find a job or trying to pay for an education.

Point 3: protection. Do I need to say more than teargas and water cannon?
Point 4: top priority. Are the people of the Gambia the president’s top priority? Things would look very different if that was the case.

Point 6: remorseful. All humans can make mistakes but these can be repaired. Communicate with the citizens, show your intentions to man up and do a better job and people will appreciate that.

Point 7: impress you. It seems a bit late for that, I’m afraid. Times flies fast and soon it’s December. You can’t hide your head under the pillow anymore; 3 years Jotna is going to bite your behind.

Point 8: quick replies. Where is that ability? Do you have it or don’t you care? Perhaps you think that as a president you are so much higher up than ordinary people.

Point 9: dates. A date can mean a time when you are expected to show us results.

It’s only about matters of faith when the perspective is eternal, not in politics.

Point 10: pride. Are you made to feel that you mean a lot to your president? Do you feel his gratitude for bringing him to his position? Nope!
Point 11: your opinion matters. The lack of communication is a lack of respect. It is a sign of not caring about your thoughts or opinions.

Point 12: open up. A president is also a human being. If he showed that he knows how you feel, that he cares about you there would be an openness in the relation.

Once upon a time….that is how many stories begin, and I wonder how the story of this mandate period will end.

Will it be a happy ending, where we find that the main character in the story is truly a man of his word?