Businessmen who discovered cocaine in their container bailed 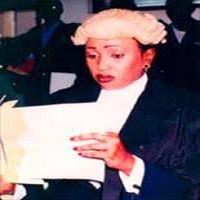 The High Court of the Gambia presided over by Justice Amina Saho-Ceesay yesterday ordered the release of Ossama Cheeytani and Mahdi Tageedin, business tycoons upon them entering into recognizance in the sum of D2.5 million each with one Gambian surety in the like sum.

The High Court Judge also directed that the surety must deposit the document of title to a property in the Greater Banjul Area valued at not less than D5 million with the Registrar of the said court.

The presiding Judge further ordered that the applicants; Ossana Cheeytani and Mahdi Tageedin deposit their passports with the Registrar of the court as condition for their appearance before any court in the event any charges are filed or likely to be heard.

Justice Amina Saho-Ceesay also ordered that upon fulfillment of the said conditions, they be admitted to bail pending the hearing and determination of any charge.

The presiding Judge also directed for expedited hearing of any matters involving the applicants.

Justice A.S. Ceesay’s order came and was premised on a motion for bail dated and filed on the 30th July, 2019 containing a 23-paragraph affidavit sworn by one Rajaa Skaf Tajeddine.

The affidavit in support of the motion for bail amongst other things disclosed that the applicants are business tycoons who recently imported containers of sugar and whilst the containers were being offloaded, some quantity of cocaine was found therein.

The affidavit in support of the motion also disclosed that the applicants were the very persons that reported the discovery of the said cocaine to the authority but were unfortunately arrested and detained.

Meanwhile, presiding judge A.S Ceesay in her order asserted that the court has reasonable grounds to make an order for the release of the applicants as the State/Respondent were not opposed to granting bail.

Meanwhile, judges in the superior courts of the Gambia would commence the summer vacation today, 1st August, 2019.

The Standard has been reliably informed that Justice Ebrima Jaiteh would serve as the vacation judge from the 1st August to the 23rd August 2019 but the summer vacation is expected to end on the 30th September, 2019 and the new legal year would begin on the 1st October, 2019.