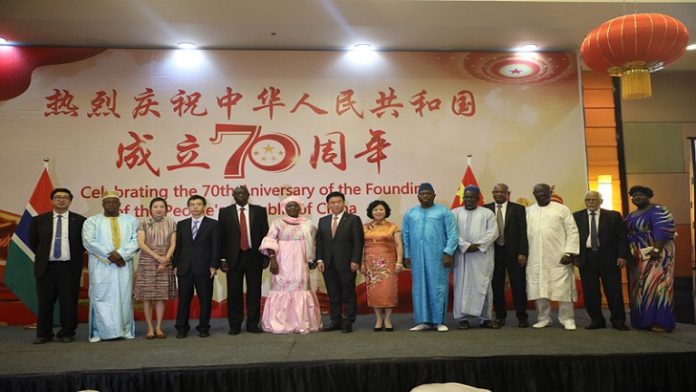 With pomp and glitz, the People’s Republic of China celebrated the 70th Anniversary of its founding on Saturday at Coral Beach Resort.

The Chinese Ambassador to The Gambia, H. E. Ma Jianchun, in his keynote address expressed delight at hosting guests comprising top government officials, members of the diplomatic corps and friends of China to the august event.

This year’s celebration marks the 3rd anniversary of the resumption of China-Gambia diplomatic relations.

The People’s Republic of China was founded 70 years ago, after over a century-long arduous struggle by the Chinese people and started the historical journey of reform and opening-up to the world 41 years ago.

He noted that within the framework of FOCAC and South-South cooperation, China-Gambia cooperation has yielded a lot in a very short period.

“Hundreds of Gambian students are studying in Chinese universities and this year alone, more than 400 Gambians will go to China for various short-term training or capacity building projects and 40 Gambian students are awarded Chinese government scholarships,” he added.