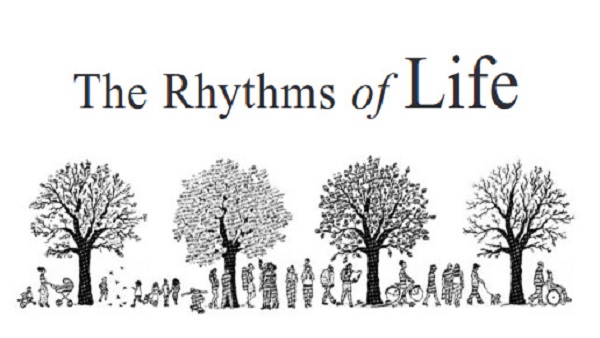 Everything has a its own rhythm; your heart, the nature, the music you can hear.

Your heart beats in a constant pace, you don’t need to do any effort for that because the smallest part of your brain controls your heart beat and your breathing.

The nature has a rhythm; the seasons comes and goes as the world turns around.

Up here in northern Europe the days are shorter in the winter time.

The axis of the earth is leaning and in the summer it is leaning closer to the sun. Our days get warmer and longer, the opposite appears in the winter.

Even if the seasons has changed a little because of the climate changes, the rhythm is still the same.

Look at the ocean and see the waves rolling in.

They follow their own rhythm, either it’s fast or slow.

Birds come back to the Gambia after had stayed the warm months in Europe.

They lay eggs and the nestlings grow until they are ready to follow the flock back to Europe again.

Caterpillars transform to butterflies, bees wake up early in the morning ready to gather more nectar.

The creation is a miracle, an invention no human brain could have created no matter how smart they are.

In a mothers womb lays a small fetus that can hear sounds when it’s only 8 weeks old. When it is 18 weeks old the ears have developed, even if they don’t look exactly like ears in the beginning.

The fetus can hear a lot of sounds both from within the womb and from the outside.

From the inside it can hear the mother’s heart beat and the different kind of sounds a human body is doing all the time. From the outside it can hear its mother’s voice, music, sharp noises and other voices if they are repeated regurarly.

Scientific tests has been made where the unborn child has been exposed for the same type of music or a special song every day during the pregnancy.

The pregnant woman could tell that after a short while the fetus reacted in the same way every time it was exposed for the music.

She could feel it kick or move in a special way when it heard that specific music.

The scientists have found that when the baby was born, and it yet again exposed to the same music as in the womb, the baby showed a reaction of recognition.

They had to test this several times of course to eliminate the doubts that it was only a coincidence.

I remember when I was expecting my first child, and I was supposed to wake up early one morning.

I had set the alarm clock to be sure to wake up in time.

I must have been sleeping heavily because I didn’t wake up from the alarm.

I woke up because the baby in my womb got scared by the sharp sound. He kicked me so hard inside the womb so that was what woke me up.

When I was expecting my second son I continued to sing the same song, and I noticed when he was born that he got relaxed quickly by this song.

It was like a signal to him that it was time to sleep, he had heard that even before he was born.

The strange thing is that when my daughter was born some years later she didn’t want to hear that song.

When she was old enough to explain why she didn’t want me to sing it, she said that it made her sad. She is 24 years old now and she still can’t hear this song without feeling sad.

In the Gambia you are surrounded by music and rhythm everywhere. You hear it from the radio, TV-sets, internet and young people have ear plugs to their mobile phones so they can listen to their favourite music everywhere.

Early mornings the birds begins to sing and soon enough you hear the first call for prayer from a nearby mosque.

It gives you comfort, you know what to expect from the day.

The same way a baby gets comfort by hearing the mother’s heartbeat, this pace or should we call it rhythm sooths your soul.

Try to ignore every other sound for a while and focuse on the calling for prayer.

You know that some things will never change and your stress is suddenly released.

A baby that is stressed by too many new inputs is getting comfort when it comes back in its mother’s arms and it can listen to her heartbeat. An adult can get the same comfort by listening to the rhythm of life.

When I traveled through the Gambia, to get to Senegal for the first time in my life, it was because of the rhythm.

Some years before that first visit I had participated in a drumming and dancing workshop.

It lasted for a week and the music immediately touched my heart.

Our teacher was from Senegal, and when he spoke about his country I began to dream about visiting it one day.

I have been there several times since then, I have been drumming, dancing, singing in Mandinka with the worst accent you could ever think of.

Even the lizzards who were sun bathing on the wall were laughing! This was 12 years ago, and as someone wise has said: ”You can leave Africa, but Africa never leaves you.”

Not all experiences in the Gambia and Senegal have been good, but I have learned a lot.

This is what I teach my pupils nowadays. My mission is to erase their prejudice and instead make them curious about Africa.

In our curriculum it says that our students shall learn about music history, among a lot of other topics.

I remember from my years in school that it was all about a lot of composers who lived several hundred years ago.

It was so boring, it felt like these old composers hadn’t been real people. So much of the music that is popular today began in Africa.

When I try to remember what my music teacher taught us, the memory is blank.

Somewhere on the road, during all these years in school, we were fed with what is called classical music.

This means music composed in the Western world. This music is built on certain rules, harmonies and written notes.

No place for improvisation, everything is controlled.

A lot of people find this appealing and if you belong to the higher social classes you are supposed to enjoy this kind of music in the first place.

There are a lot of excellent musicians all over the world, they are highly trained and began to play their instruments in early childhood.

It takes a long time to become skilled, only musicians and ballet dancers begin to practise very early – from 4 years old or a few years later.

In most other professions you can decide as an adult what you want to become, but if you decide to become a skilled musician by then you need to realize that ”the train has left the station” a long time ago.

I have never learned to enjoy the classical music, maybe it is still too much associated with the extremly boring music lessons.

Nowadays I have to teach my own pupils about it, but I try my best to make the music and the composers interesting.

We look at videos, read interesting facts about the composer’s lives, play together and try to have fun.

This is really important – to have fun! It is easier to learn something when you have fun instead of being nervous for the teacher’s judgement all the time.

Having fun with music is really what I learned in Senegal and in the Gambia.

I love playing djembe, I’m not good at it but it’s fun.

Some years ago I took lessons for a local djembe teacher in the Gambia.

This man is amazing! I think he can even teach dogs to play djembe! We were sitting at his compound, this thin man in his ragged clothes and I.

He had the greatest smile and a pedagogical skill that he was born with.

I don’t think he has spent many years in school but that didn’t matter.

He was the best teacher and he was so inspiring.

Something that amazes me, as well as many other visitors in the Gambia, is that you really know how to have fun.

The days are filled with hard work and money is always a problem, but everywhere we see Gambian ladies in colorful, beautiful dresses.

A baby on their backs and another at their hand but these ladies sway their hips as they heard some inner music.

Men walk on the streets or sit in the shade, someone has a radio and the music accompanies their chatting with each other.

In the evenings you can see even elderly ladies dancing on the streets when they gather for some occasion.

There is life, laughter, a pulse, a rhythm everywhere and it is contagious.

That is out of the question, that would be embarrassing.

We are too stiff for that, but we learn slowly, slowly to enjoy the small things in life more.

Right now we have summer here, but too soon it’s over and the temperature begins to sink. 6-7 months of the year gives us cold weather and we are forced to stay indoors as much as possible.

The cold has always kept us isolated and of course that is affecting the mind too.

In the old days, before we had electricity, the winterdays only had a few hours of daylight.

In the part of Sweden where I live we get daylight at around 8 in the morning and the sun goes down at 3,30 in the afternoon.

This is when it’s in the middle of the winter, and you can see that it’s dark when we go to work in the morning and dark again when we go home.

We have four seasons here; winter, spring, summer and autumn.

The seasons come and go in their own slow rhythm.

This rhythm has inspired many artists and composers, authors and poets have used it metaphorically.

Either you enjoy music or not, you are always surrounded by the rhythm.

It begins where life begins; a pulse that follows you as long as you live.