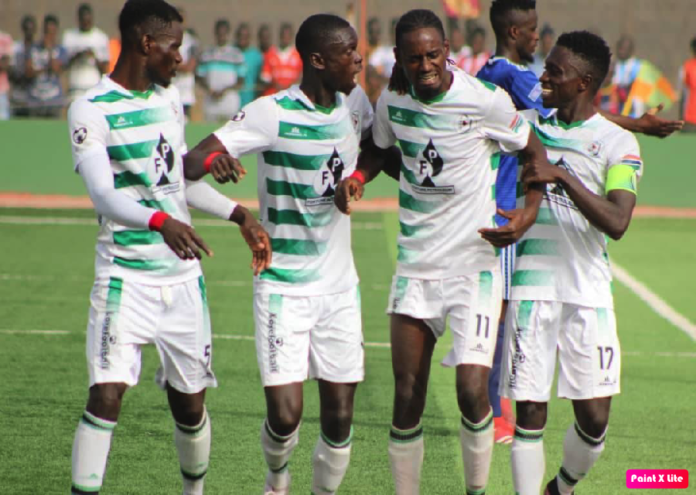 Fortune FC has reached a new height in the GFF league with a scintillating four-nil humiliation of big brother Brikama United on Saturday in the week six of the title race, which is now firmly in their grip.

The scene was at the imposing Live Your Dream Academy in Basori where the Petroleum boys were as adventurous as tigers with marauding attacks that split Brikama United’s defence forcing them to embark on dangerous tacklings, one of which saw Adama Sabally penalise for bringing down Fortune’s enterprising Ebrima Camara (Bura) in the box.

Sabally compounded Brikama’s woes by picking a quarrel with the referee who sent him off before his victim Camara stepped in score the spot kick,his first goal for Fortune, into the 41st minutes. Angry and vindictive to both referee and opponents, Brikama could not regroup and Fortune exploited their mood to bang the second goal when Ebrima Camara returned to set up Assan Njie who scored a fantastic goal to make it 2-0 for Fortune right on the break.

The frustration was too much to bear for the Satayba Boys who began to stamp their feet on the proceedings with skill and urgency but when Fortune FC’s rampant Ebrima Camara scored in the 61st minute, it was clear Brikama United was heading for the gallows. The night was beyond repair for the Satayba boys whose humiliation was completed with the 4th goal minutes later through Lamin Saidykhan.

Fortune FC is now 4 points clear at the top from second place GPA who drew one-all against Gambia Armed Forces. At Yundum, Gamtel and Banjul United drew one all.

As we go to press last night, Real de Banjul and Waa Banjul are playing in Basori, as Hawks meet Marimoo at the Independence Stadium and Elite United clash with Wallidan.