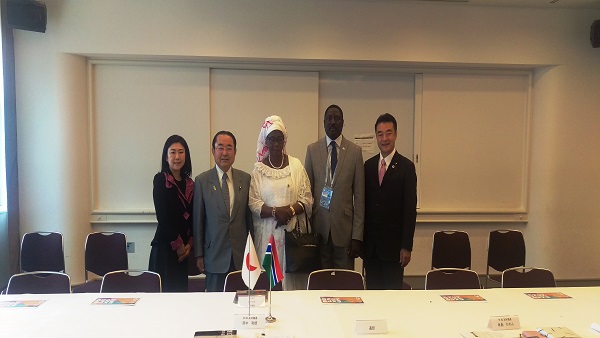 The Gambia participated in this year’s Tokyo International Conference on African Development TICAD in Yokohama from 28th to 30th August.

In a statement to leaders during the opening ceremony, the Vice – President thanked the Government and the people of Japan for graciously hosting the 7th TICAD and for the warm reception and hospitality accorded to her and the Gambian delegation since arrival in the beautiful city of Yokohama.

She reminded participants that it is crucial that TICAD remains a unique process that is immensely contributing to Africa’s development and its regional integration agenda adding that this goes to complement Africa’s efforts to further strengthen partnership by exploring new areas of cooperation with Japan in a bid to boosting its socio-economic development through capacity building in the areas of technology, agriculture and health.

Dr. Touray observed that the summit is an excellent platform and opportunity to link African and Japanese businesses in a win-win situation.

She said it is only through such partnerships that both parties can ensure their respective contributions to national development as well as the maintenance of global peace, security, progress, prosperity and sustainable development.

She said The Gambia being the “Smiling Coast of Africa,” is open for business and has unique endowments that serve as a basis for mutually beneficial cooperation.

He said the Japanese government will do everything possible to support Japanese enterprises in investing in the future of Africa.

Abe said in order to support business activities in Africa, his government will strengthen its assistance for human resource development.

He said the Japanese government will help the development of 3000 personnel in the next six years in Africa.

He said his government will launch a new approach for peace and stability in Africa. Under this approach, Japan will support African countries’ efforts to prevent, mediate and arbitrate conflicts in cooperation with the African Union and regional economic communities.

Meanwhile, on August 31st, 2019, the Vice President was accompanied by the Honourable Minister of Foreign Affairs, Dr. Mamadou Tangara to pay a courtesy call on the Prime Minister of Japan, Shinzo Abe at his office in Tokyo.

At the meeting, the vice President returned gratitude to the Government of Japan through the Prime Minister for all the assistance rendered to The Gambia in the areas of agriculture, health, education, and food aid.

In response, Prime Minister Abe welcomed the inauguration of the new Government and Gambia’s efforts to democracy.

Prime Minister Abe thanked Gambia for supporting Japan at the international fora. He expressed Japan’s readiness to deepen bilateral cooperation with The Gambia in the areas of capacity building, water supply to rural people, health and agriculture.

He urged The Gambia to identify new areas of cooperation for both countries to further work together adding that Japan is going strongly to promote Japanese private sector investment in Africa.

The meeting centered on bringing bilateral relations closer with the continued support of Japan in the area of capacity building, Gambia’s active participation at 2020 Tokyo Olympics and Osaka Expo.

The Vice – President informed the Japanese side that The Gambia came to TICAD as a delegation in order to further deepen ties between the two countries. She said 60% of Gambia’s population are young and since Japan is a leader in technology, this makes it relevant to broaden partnership in a bid to build the capacities of youth.

She informed of the desire of the Government to invite Japanese parliamentarians to visit the Gambia’s National Assembly in the form of an exchange visit.

The decision, she added will be finalised once consultations are done with the National Assembly.

Commenting on the needs of the country, she highlighted collaboration in the area of energy, science and technology and road infrastructure.

She thanked Japan for the education feeding programme adding that it has increased the nutritious status of food children eat at schools and also increased the number of school going children.

On his part, the Honourable Minister of Foreign Affairs Dr. Mamadou Tangara, first and foremost thanked the Japanese side and informed them that the instruction given by President Barrow is to support Japan on all its resolutions at the international fora.

He said the President would have loved to be in Japan for TICAD but owing to his schedule he could not. He said Government is experiencing budget constraints but, notwithstanding, determined to open an Embassy in Japan in order to take relations to another level.

He noted that human resource is one of the cornerstones of development, adding that there is a lot that Gambian youth can learn from Japan’s resilience.

The Chairman of the Association, Mr. Kazunori Tanaka, welcomed the Vice President to Japan. He expressed delight that relations between the two countries are coming closer while noting that there would be cooperation to boost the tourism industry and increase and maintain participants in ABE Scholarship.

He informed that the Government of Japan is pleased to extend invitation for Gambia’s participation at the new Emperor’s crowning ceremony.

He indicated that in 2020, on the sidelines of the Emperor’s ceremony, they will twin a town in Japan with a town in The Gambia.

This, he adds will also bring strong social connection between Gambians and Japanese. He informed that in April, 2020, Japan will host Crime Prevention Congress and will request the participation of the Gambian judiciary.

On August 31st, 2019, on the sidelines of TICAD, the Vice – President and delegation paid courtesy call on H.E Macky Sall, President of the Republic of Senegal at his residence.

The two leaders exchanged views on ways and means of strengthening and maintaining peace and free movement of people across the borders.