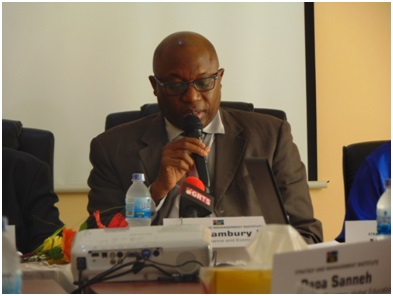 Gambia’s current challenges are not confined to the problems of the past, according to Mamburay Njie, and in order to bring lasting development government must strategise and revitalise its private and public institutions.
The finance minister made these observations at the opening of a week-long training organised by Strategy and Management Institute, SMI for senior government officials. It seeks to boost their capacity and efficiency towards addressing the country’s constraints to meet its needs and development aspirations.
The minister said despite the strives the country made in the past three years, The Gambia still faces many trials.

“…To respond to these challenges, government must re-strategise and revitalise its private sector and public institutions,” he stated.
He said the focus of the government now is to work towards attaining visions set out in the National Development Plan, saying that the ‘New Gambia’ holds ample opportunities for growth and development of the private sector.
However, he cautioned that “…Harnessing these opportunities must come with the responsibility of developing ones capacity to ensuring utmost success.

“As the government continues towards good governance and transforming the economy the need for strategic reforms cannot be overemphasised and am confident heads of departments and institutions will benefit hugely from this course,” he added.
The private sector, the minister added, is a key priority area for the Barrow-administration.
“…Thus major players within the sector are competing at global level and the need to develop the capacity of their work force.”

He expressed confidence that the Strategy Management Institute would help government lay down plans to re-strategise and revitalise the economy in line with the NDP.
The managing director, SMI, Anthony A Taylor, disclosed that the objective of the SMI is to contribute to The Gambia’s vision of improving the capacity of policy and decision makers both in the private and public sector.

He highlighted the “huge gap” that needs to be filled in term of capacity of the work force of both private and public sectors.
“Gambia including some other African countries have a lot more work to do to catch up with the rest of the world,” he said.