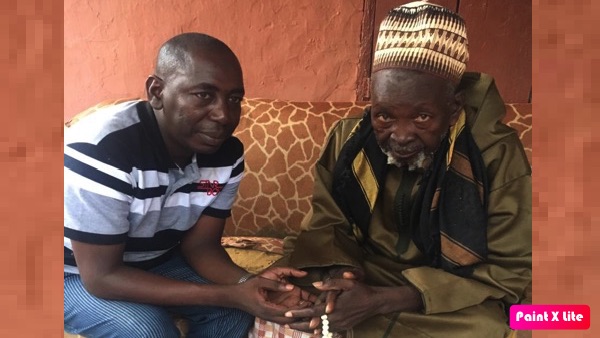 Who was Imam Alhaji Essa Gigo? Alhaji Essa, the son of Gibbi Gigo became the Imam of Kuntaya form 1960-2020. The fangs of death snatched him on 22nd August 2020 when he was mostly needed by family and community. Before I begin to register Imam Alhaji Essa Gigo’s great Islamic crusade and leadership, it is vital to go back into history a bit and throw some light into the former Imams of Kuntaya. The following people were Imams in different times, eras in Kuntaya and in sequence; Demba Gigo, Alpha Suley Bah, Gibbi Gigo (died in 1935), Abdoulie Hamat Baal (Bah), Gidda Hamina Bah and Alhaji Essa Gigo.

It is worthy to note that Alhaji Essa Gigo often called ‘Jack’ or boy a pseudonym used by some of his cousins as a joking relationship. Most of us eventually adopted Jack or boy because of his humility. He will answer to every one using the same. He was born in 1929 and widowed by two wives. His first wife, Amie Fatou Khan passed away in 1989. Alhaji Essa Gigo mastered the holy Quran at an early age and went to Mecca in (1959) while he was in the Darra aged 30 years which was a rare phenomenon at that time.

His father Gibbi Gigo died in 1935 when he was just six years old. His Uncle Amadou Musu took charge of him and he was the first person to initiate him in the learning of the Quran till 1950. In 1950, he decided to go to ‘darras’ to extend his Quranic knowledge, Sharia and other subjects of Islam. The first place he started was in a village called Baw or Misra Alieu Njie where he started roaming around the marabouts in the Saloum amongst them was Daga Sambou and Nyangen. His marabout in Nyangen, Majara Nyan is still alive. He was a ‘talibe’ of the Tijanniya Brotherhood, he took this from Alhaji Amat Dem of Sokon Senegal. Alhaji Amat Dem mentored him into ‘Tafsirul Quran’. He loved Alhaji Amat Dem both during his lifetime and after his dead. He had dedicated his wealth and his property to the family of this great man.

When Alhaji Essa Gigo completed his tutorship from the Kalipha Alhaji Amat Dem of Sokon, he sought permission to be capped and considered as a graduate so that he could finally go back to Kuntaya and start a new life. The Kalipha told him that he would prefer him to stay in Sokon Senegal so that he could take charge of the central mosque and the ‘Dara’ because among his ‘talibes’ he was second to none as he was aging. The Kalipha told him that he would also let his daughter marry him. This showed that he was an asset that no responsible Kalipha could let go so easily. Alhaji Essa Gigo being so polite, humble and respectful told Alhaji Amat Dem of blessed memory that he would like to go back home to Kuntaya and pay his respect of his uncles as he had just come back from Mecca and thereafter, he will give him his response.

Alhaji Essa finally came home and narrated the proposal from Alh. Amat Dem to his uncles notably amongst them was the late Alhaji Gidda Khan and Sefyfo Alhaji Abu Khan of blessed memories. After keenly listening to the narration of Imam Essa Gigo, the late Sefo Alhaji Abou Khan after consulting with his brothers offered Imam Gigo his first daughter Amie Fatou Khan’s (of blessed memory) hand in marriage, the Imamship of the mosque of Kuntaya and a dwelling place with consultations from his elder brother. He was also a District Tribunal in the late Sefo Abu Khan’s Court from (1977-85).
It is also worthy to note that Kerr Amadu Fayal, Kabakoto and Kerr Sidiki all claimed ownership of Alhaji Essa Gigo because of the blood relationship. He could only live in one place that was Kuntaya but he had served all of them diligently while he was alive.
Deaths are often painful but for the deaths of certain individuals are indelible.

Alhaji Essa Gigo was an individual who dedicated the whole of his life to the betterment of the society, an individual who only went to bed when all had slept, an individual who valued others’ lives more than his own and an individual who sacrificed the whole of his wealth to the interest of the poor. Imam Gigo did not die but took leave of his life as endorsed by Allah the Almighty. Alh. Essa Gigo, the Imam of Kuntaya bade his final farewell to the people of Kuntaya on the 22nd August 2020. As the Imam the only place he had adored and cherished was the central mosque. He was punctual and regular to the mosque; he led and guided the people in the right direction. His mastery of the Holy Quran and the Ahadith are worthy of mention. He had dedicated all his life to the mosque and the farms. He lived by his sweat. He did not pester anybody during his lifetime for living but depended on the proceeds from his farms.

His life was not only on the religious aspect, but he was indeed the man of the people. His presence in social gatherings was always cherished, highly welcome and recognized as he made the occasions more colorful. His sincere contributions towards the upliftment of the conditions of the socially disabled were also remarkable. Though serving the pinnacle of the mosque as the head and an elderly person, he was still and advocate of maintaining the social status. He entertained the spirit of banter-brothership to the final breath of his life. He was remarkably known for cracking jokes with his cousins despite his age.

Politically, as a man of Allah he reserved himself. During sermons he offered at public places or at the mosque on Fridays, he had never even once fallen in the pit of distorting people’s party affiliations. He had always used his position to preach peace, he had highlighted that politics was not meant to divide people but to unify people and to part take in deciding the right occupier of the seat on the mantle of leadership.

He held an admirable stance within the society. Though he had never remained aloof on issues gyrating around him, he maintained the role of a father and always offered fatherly advice to anyone who needed it. His charismatic leadership values were exemplary. He could have twisted the traditional values to his advantage, but instead considered fostering always good and exemplary leadership.

Many keep wondering what is the connection between Alhaji Essa Gigo and The Khan Family in Kuntaya. For the skeptics, the answer is not far-fetched? Kunta Khan gave birth to four great

omodou Raki Khan and Iseh Raki Khan.  Follow the chart below to connect the dots.

Therefore, I would like to state clearly for the doubters and skeptics, there is no difference between the Khans and the Gigos, it’s kith and kin.

Alhaji Essa Gigo though dead, he still lives. His legacies for the remaining of the century would go inerasable. His tangible and judicious decisions would continue to serve as a boiling magma in the brains of those who had witnessed his Imamship.

Often, I have listened to so many sermons from other preachers, but the ones he gave during his tenure as an Imam were issues that affected the lives of his people. He had used the Quran towards bettering the lives of the people. He had used the mosque as the house of Allah but opened its benefits to all and sundry. Obliged to defend the words of Allah, this gifted and highly religious man had dispelled so many myths and made attempts to unify all and sundry. Writing a tribute to this man of high caliber, I must admit that, there are others who could have done it better. Whatever, failing to come up with one for him, means negating the beauty of reality and denying the world a worthy information.

Lest I forget, Jack or boy I used to call you, forgive me and the entire youth of Kuntaya for uprooting your coos farm to widen our football field because of ‘Nawettan’.  It wasn’t me per say but let me confess it was on one of your offspring and grandchild.  My dear cousin, sleep so well until we meet again. Adieu! Adieu! Adieu!

Your wives’ children, the people of Kuntaya, Jokadou, Walo, Saloum, Sokong and your entire friends in the Gambia and Senegal are also saying adieu!

By Hassoum Ceesay I have lost a good uncle and friend of mine last weekend, when Mr. T.G.G Senghore, a pioneer Gambian Civil Servant, third...
Read more
Tribute

He conquered a virgin forest that no ordinary man would dare visit or dwell in and established there one of the biggest and renowned...
Read more
- Advertisment -